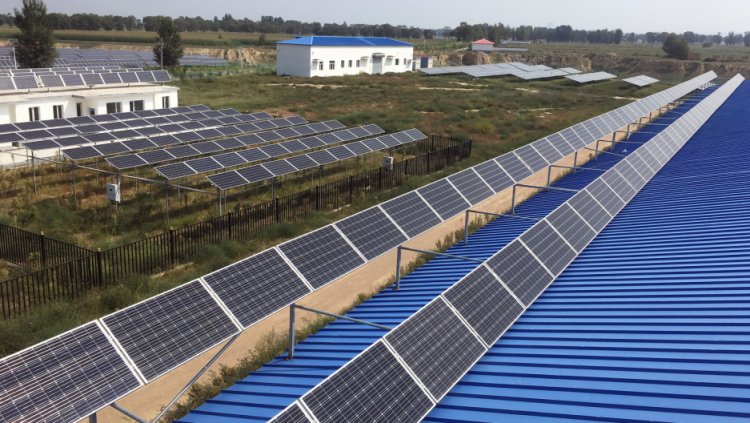 A Step By Step Guide to Solar Powered Hydroponics System

To optimize growth and the content of nutrition are very important aspects of the hydroponic system. Also, hydroponic crops could contribute to the common good in a bigger aspect by reusing heat, water, and nutrition. Most people are aware that the climate is changing, and in several places in the world people are starving, and other people are struggling because they are undernourished by eating improper food. To satisfy the future increase in population and the need for change in diet, food production needs to increase by over 60% in the next decades.

The hydroponic cultivation system provides an alternative way for farmers who have a narrow field or just have a yard to carry out agricultural business. The hydroponic requires a controlled environment for the proper growth of plants, less chance of diseases, and faster growth. It mainly includes automated monitoring and controlling environmental parameters like temperature, humidity, pH, and conductivity, etc. Then, the parameters are acquired by the respective sensors.

The hydroponics technique is the best way to grow plants without soil. Hydroponics can be grown outdoors or indoors even in small spaces. The hydroponic system allows for the crop to grow in the area where growing plants traditionally has been a problem and the place where the soil is poor in terms of fertility and where water quantity is minimum, where farmland is too expensive. In Hydroponics techniques plants are placed in a growing medium and nutrients are delivered directly to plant roots. Plants grow with their roots in nutrient solution only or an inert medium. The hydroponic method is a better, faster method to grow plants than the growing plants in soil. The hydroponic system provides better, more nutritional results with the efficient use of water and fertilizer. The hydroponic system allows farmers to grow more food in less space as compared to traditional soil gardening.

The benefits of hydroponic system, it can be raised in any season and the plant nutrients are dissolved in the water used in a hydroponics system and are mostly in inorganic and ionic form. Hydroponics is more efficient and earth-friendly than conventional farming.

PLC (FX5U) is the major part of the automated hydroponic system

Solar power – Solar power is power converted from the radiation created by nuclear fusion in the sun. This can be using Photovoltaics (PV) which is the process of converting sunlight into electricity using solar cells. The orientation of the solar panels is very important due to the efficiency of the panels. The azimuth angle and the elevation angles are used to orientate the solar panels.

The rooftop Solar Powered hydroponics system is dependent on a steady power source, and be non-dependent on the power grid. The roof on the J-building is suited for solar panels based on that some of the space on the building are already used for other solar panels. Then, this made the choice fell on using solar power. The system automatically detects and controls the temperature, humidity, pH level, and light using different sensors. It saves wastage of water and fertilizers, gives better yield as compared to the soil system.

Solar energy is mainly used as the power supply and Wi-Fi technology for communication purposes. Then, this system helps the farmers to increase efficiency. Gives better yield – The solar power used is most energy-efficient, eco-friendly to the plants, but the efficiency reduces during the rainy and cloudy day. It requires constant monitoring in case system failure occurs in the system. It is mainly used in terrace farming or gardening, also in large scale farming. Also, it requires less water compared to the conventional growing method, no harm fertilizers are used; plants can be grown in any season.

The main aim of the solar hydroponics system is to grow a plant without soil by using a solar supply. It uses 90% of water efficiently. As compared to soil cultivation, the plant production increases by 3 to 10 times. Agriculture in the growing countries faces some serious challenges in the coming decades that mainly includes competition for water,  energy resources, rising costs, increased world population, competition for international markets,  changes in climate, environmental impact, and uncertainties in the effectiveness of the current policies as regards adaptation strategies. Hydroponic farming has found rapid growth and widespread use in recent years.

Enjoy the benefits of using this solar-powered hydroponic grow box. This uses 90% less water than traditional growers and it can fit in any small space. As the heat generated by the grow lights maintains the grow box at 10 to 20°C above the outside temperature. It is perfect for sprouting seedlings, growing small herbs in early spring or late fall.

In case if you miss this: Growing Organic Sweet Potatoes.

In natural systems, the soil provides support, water, oxygen, and nutrients to the growing plants. In a soilless system, each of these functions should be provided by different elements. Then, supports are provided by growing media such as rock wool blocks, coco coir, clay balls, or other inert materials that do not change the hydroponic solution characteristics. Plants obtain their nutrition by way of their roots being in contact with a nutrient-rich and water-based solution.

The principles of the hydroponics system are increased oxygen to the root zone and liquid feed delivered directly to plant roots. These factors result in increased growth rates and increased crop yields when compared to traditional soil gardens where much lower oxygen and nutrient levels are present.

One of the main disadvantages of hydroponics is that there is not enough oxygen dissolved in the solution for the roots to perform respiration. Then, this is solved by pumping water and installing bubblers in the solution tank to supply oxygen. Nutrients are dissolved in solution in a predetermined quantity, but care should be taken to maintain the salt concentration and pH levels. A pH level between 5.5 and 6.5 is recommended for growing plants.

Solar-powered grow lights allow you to control light cycles, determining your plants’ growth phase while minimizing or eliminating the use of mainline power. Many crops can be grown indoors, but cannabis and microgreens are considered some of the most profitable crops.

Generally, solar panels generate 1000 watts of power per square meter when exposed to full sunlight. Depending on where you live, those hours can change greatly. If you’re only getting 3 hours of full sun in northern winter climate conditions, you can power a 1000 watt bulb for 3 hours per square meter of solar panels on a home.

When installing new grow lights, you will need a way to hang the lights above your plants. You will need a way to raise the fixtures as the plant grows in height. Then, this can be done with a pulley system, allowing you to hang the light from different chain links as the plant grows. It is best if you considered purchasing a timer to control light cycles along with some form of ventilation to keep air moving. For solar light setup, you’ll need a solar panel to collect energy from the sun, an MPPT (maximum power point tracking) controller to optimize amperage to the battery. A deep cycle battery to store energy and also prevent damage from excessive discharge, a power inverter to convert DC to AC, and of course, your grow light.

The Solar Powered hydroponics system needs to control and monitor temperature, pH, and distribution of water. It is the power supply, and generally, it runs from conventional electrical energy and it should continue to run all the time. Then, the automation for the hydroponics system that would measure and control temperature, pH, and water level in the water tank. It is a solar power unit that functions as a primary power supply and will shift to conventional electrical energy if there is no adequate energy to run the automation for the hydroponics. Then, this automation hydroponic system using a smart solar power plant that can monitor and control pH level, temperature, water level, the intensity of light, electrical current, and voltage.

The Solar Powered hydroponics system is important that the system useless component compared to the traditional solar power system. To eliminate the need for an inverter, use a DC pump. To eliminate the need for a battery, and using a DC Converter instead of a traditional solar panel controller. Then, the systems will shut down when the sun goes down, thus it is suitable for deep flow technique hydroponic system.

The Solar Panel – The selection of solar panels will depend on the power required by the pump and a10 watt solar panel must be sufficient to run the 4.8-watt pump, although recommend using 20 watts (4 times of power). The reason for selecting a roof instead of a steel pole to mount the solar panel is simplicity.

In this system, the energy output from the Solar PV systems is stored in a couple of 100AH batteries. If only the system gives power to the 25 W water pump. It is assuming the system can keep autonomy run until 4 days continuously by considering the depth of discharge 50%. Finally, the pump is the output of DC-DC Converter is used to power the 12 volt 4.8 Watt water pump. The hydroponic system keeps plant growth optimally and protects from external elements such as pests, rainfall, and climate change. Especially when using the full controlled system with equipment to be controlled such as sensors (temperature, pH level), controller, and others require continuous electrical energy.

Solar Powered hydroponics developed to minimize operational cost, to keep the continuity of electrical sources. Generally, the solar system consists of the solar tracker to adjust the photovoltaic panel position, an aquarium pump to distribute the nutrition, and a temperature meter to measure temperature levels. Utilization of solar cells as renewable energy in housing or transportation this moment considered as a solution to reduce dependency on fossil energy.

Growing Eggplant from Seeds – At Home