Role of Fungicides in Agriculture, and Horticulture 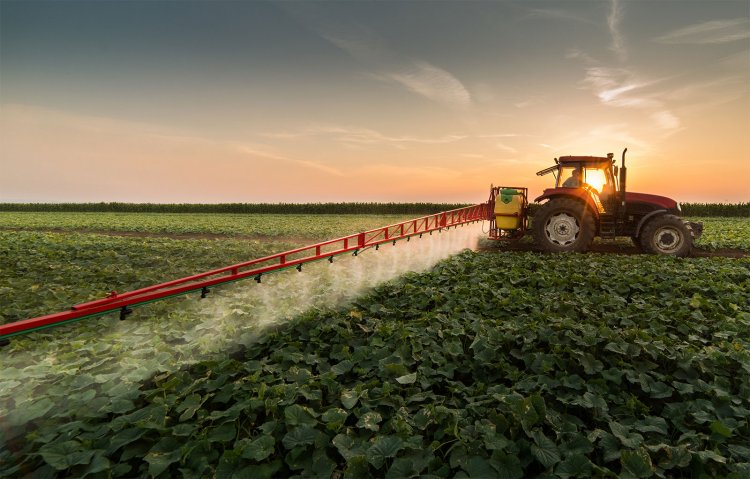 Role of fungicides in agriculture

Fungicides are pesticides that kill or prevent the growth of fungi and spores. They can be used to control fungi that damage plants, such as rusts, mildews, and blights. They might be used to control mold and mildew in other settings. Fungicides work in a variety of methods, but most of them damage fungal cell membranes or interfere with energy production within fungal cells.

Fungicides, herbicides, and insecticides are all pesticides used in crop protection. A fungicide is a specific type of pesticide that controls fungal disease by specifically inhibiting and killing the fungus causing the disease. Let us get into the full details of the role of fungicides in agriculture crops and garden plants.

Not all diseases caused by fungi can be adequately controlled by all fungicides. These contain the vascular diseases Fusarium and Verticillium wilt. Diseases caused by other types of organisms, disorders caused by abiotic factors, and insect damage are not controlled by these fungicides. Therefore, it is essential to first determine the cause of symptoms before applying a fungicide. The development of botanical fungicides can help decrease the negative impacts of synthetic agents, such as residues, resistance, and environmental pollution. In this respect, botanical fungicides in agriculture can be effective, selective, biodegradable, and less toxic to the environment. Fungicide is also called antimycotic, any toxic substance used to kill or inhibit the growth of fungi. Most agricultural fungicides and horticultural fungicides are applied as sprays or dust. Seed fungicides are applied as a protective covering before seed germination.

A guide to the role of fungicides in agriculture. Diseases are occurrence on plants, and having a significant economic impact on crop yield and quality, managing some diseases is an essential component of production for most crops. Broadly, there are three reasons fungicides are used;

(a) To control disease during the establishment and development of a crop.

(b) To increase the productivity of a crop and reduce blemishes. Diseased food crops can produce less because their leaves, which are required for photosynthesis, are affected by the disease. Blemishes can affect the edible part of the crop, in the case of ornamentals, their attractiveness, which both can affect the market value of the crop.

(c) To improve the storage life and quality of harvested plants. Some of the greatest disease losses occur post-harvest time. Fungi spoil (render unusable) stored fruits, vegetables, tubers, and seeds. A few which infect grains make toxins (mycotoxins) capable of causing severe illness or even death in humans and animals when consumed. Fungicides have been used to reduce mycotoxin contamination in wheat affected by Fusarium head blight, but most fungicides developed so far have not been effective to be useful for managing mycotoxins associated with other diseases.

The role of fungicides in agriculture

Fungicides are used to control bacterial and fungal diseases of fruit, vegetable, nut, and field crops. Some of the diseases that are controlled by using fungicides are mildew, leaf spots, blights, and apple scab. The fungicides are the last line of defense in the armoury of integrated disease management (IDM) system. They do not create crop yield but protect an inherent yield potential that the grower may realize in the absence of disease. Securing effective disease control from fungicide applications is dependent upon the disease pressure and the effectiveness of the fungicide to control the disease. Globally, the same fungicide active ingredients are mainly used against a similar range of fungal pathogens.

Some tips for using fungicides

Keep these tips in mind when using fungicides;

In case if you miss this: One Acre Farming Model, Income, Profits, Ideas.

Role of fungicides in disease management of agriculture

Plant diseases are best managed by integrating several control practices that can include; crop rotation, selection of disease-tolerant or disease-resistant crop cultivars (cultivars genetically less susceptible than other cultivars), planting time, level of fertilization, micro-climate modification, sanitation, and application of fungicides. Fungicides are a vital part of disease management as;

Fungicides fall into many categories that overlap. Some of the products stick to the plant on contact, providing a layer of protection against fungi; others are systemic and then move through the entire plant, destroying the fungi from inside the plant.

A single fungicidal product can belong to both categories, thus a contact fungicide prevents fungal spores from germinating on a plant. Conversely, a systemic fungicide can be preventative or it might be curative. What this means is that it is important to be clear on how the product works when you’re applying a fungicide. A preventative fungicide is ineffective on plants suffering from a fungal infection, and a contact fungicide could wash off in rain and have to be regularly reapplied.

Fungicides differ in how they affect the fungal cells. Some target a particular procedure or range of processes within the cells, or they may damage the cell membrane. When the same fungicide is applied regularly to plants, fungi develop resistance to its control system and the product loses effectiveness. To help stop resistance from developing in the garden, use a range of products that employ different methods to control fungi.

The other category is an organic type of fungicide. They are Safin, Sporrin, Blastin, and Bio – Vitrioll.

Fungicides are pesticides that prevent, kill, mitigate, or inhibit the growth of fungi on plants, but they are not effective against bacteria, nematodes, and viral diseases. Fungicides can be mainly classified based on;

Mobility in the plant – Contact fungicides are not absorbed by the plant and then stick to plant surfaces. They give a protective barrier that prevents the fungus from entering and damaging plant tissues. Systemic products also called penetrants, are absorbed by the plant and can move from the site of application to other parts of the plant. Movement in the plant changes by fungicide form moving to old tissues and new tissues, new growth, moving from the top to the bottom of the leaf surface.

Mode of action – This mainly refers to how the fungicide affects the fungus. Fungicides work by damaging the cell membrane of the fungus, inhibiting an important method that the fungi, pinpointing a single process, or multiple processes in the fungus. It’s important to incorporate different modes of action by mixture or by alternating products to keep effectiveness and prevent fungicide resistance.

Fungicides are applied as a dust, granules, gas, and, commonly, liquid. They are applied to;

(a) Seed, bulbs, roots of transplants, and other propagative organs. These treatments are done by the seed company. Some treatments require to be done by the grower on-site at the time of planting. The main goal is to kill pathogens that are on the planting material or to protect the young plant from pathogens in the soil.

(b) Soil either in-furrow at planting, after planting as a soil drench (including through drip irrigation), and as a directed spray around the base of the plant.

(c) Foliage and other aboveground parts of plants using a sprayer.

(d) Inside of trees by trunk injection.

(f) Harvested produce, as a dip or spray in the packinghouse.

Fungicides are used as a formulated product consisting of an active ingredient plus inert ingredients that develop the performance of the product. Fungicides are mixed with water then applied by spraying. Application equipment ranges from small hand-held and back-pack sprayers to large spray units carried by tractors. A few fungicides are mainly applied as dust. Fungicides can be applied in greenhouses as smoke, mist, fog, or aerosol. Coverage of all parts of the plant susceptible to the disease is critical as very few fungicides can move adequately throughout a plant. Advancements are continually being made to nozzles and sprayers to improve coverage.

A range of naturally based fungicide products is available for your gardens. Copper, sulfur, and lime commonly used in powder or oil form are extremely effective at treating and preventing fungal infections. Some gardeners prefer to go even more natural and use products found around the home instead.

Oils are used to control insect pests, but by controlling these, you also manage the viruses and fungal infections they can cause. Oils are effective in managing powdery mildew disease on a variety of plants. Cooking oils found in homes, such as canola and vegetable oil, can kill disease-carrying insects. This, in turn, helps to prevent fungal infections. Oil sprays can burn the leaves of sensitive plants, thus use no more than 1 cup per gallon of water when mixing for spray use.

Sodium bicarbonate or baking soda is natural fungicides that has been used for decades, but avoid using baking soda with horticultural oils because the sodium component can build up and become toxic to plants. Baking soda alone is effective against a limited number of fungal diseases, however. The use of ammonium or potassium bicarbonate, along with neem oil, provides a better, and more effective, treatment because it provides nitrogen.

One of the natural fungicides available to you is other plants. Companion planting can help fight fungal disease and then improve the soil as well. Borage, for example, benefits nearly any plant growing nearby by increasing its resistance to pests and disease. It is mainly helpful to strawberry plants and tomatoes. Chives, which improve the growth and flavor of vegetable crops, could help prevent scab in apple trees and black spot in roses. Do not plant chives with beans or peas. Chives take about 3 years to begin effectively preventing disease, so you may want to use another natural fungicide until the chive plants are well-established. Garlic plants accumulate sulfur in the soil, which is a natural fungicide that plants will absorb into their pores when it is planted nearby.

Compost teas have beneficial microbes and nutrients that can act as mild fungicides, and they provide control of diseases carried by insects. To make compost tea, add 2 inches of finished compost into the bottom of a bucket. Mix in an ounce of unsulfured molasses to feed the beneficial microorganisms in the compost and fill the bucket to 6 inches from the top of the bucket with water. Let the mixture steep outdoors in the sunlight for 2 to 3 days and then strain the compost from the tea with cheesecloth. The tea must smell sweet and earthy. If it smells rancid or sour, don’t use it on plants. Pour it back into the compost pile and begin again. Spray the tea onto your plants and the soil about every 2 to 3 weeks.

You should not miss this: Methods of Organic Farming.

Commonly asked questions about the role of fungicides in agriculture

What is the difference between fungicide and pesticides?

How long does fungicide last?

For the most part, fungicide sprays will last between 10 and 14 days, depending upon weather conditions. If rainy conditions, the residual activity will be on the shorter side, while dry, warm, sunny weather may even extend the window beyond 14 days.

Is fungicide safe for vegetables?

What are systemic fungicides?

A systemic fungicide can be defined as a fungicidal compound which is readily translocated as such in the plant, rendering the tissues penetrated toxic to fungi.