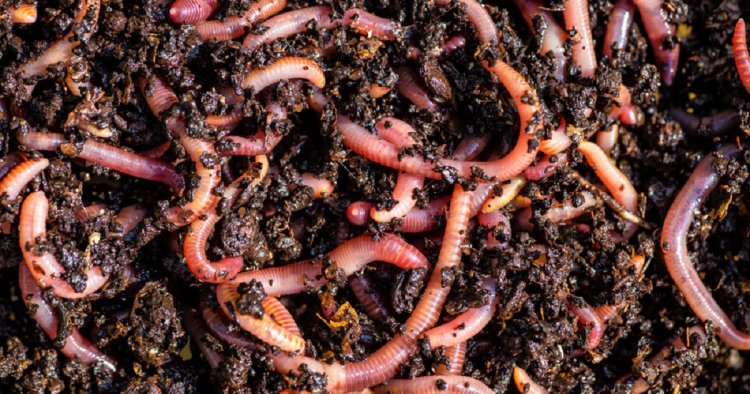 Introduction to Role of Earthworms in Soil Health

Earthworms are one of the most significant soil animals; they can maintain the fertility of the soil. Earthworms are one of the key decomposers of organic matter. Earthworms get their nutrition from microorganisms that live on organic matter and in soil material. When they move through the soil eating, earthworms form burrows or tubular channels. These burrows can continue for a long time in the soil. Let us discuss the role of the earthworms in agriculture farming soil.

Earthworms are functionally very important and diverse, and therefore potentially useful for the management of biodiversity and ecosystem services.

Guide to the Role of Earthworms in Soil

Earthworms contribute significantly to soil health as they burrow through the soil and feed on microorganisms and organic matter. There are thousands of earthworm species worldwide. These species are placed into one of three groups depending on their burrowing and feeding habits. Each group of these earthworms contributes to soil health in different ways, but they all have a couple of things in common.

Earthworms frequently excrete these castings throughout the soil profile. There, the castings rapidly stabilize and become resistant to chemical and physical degradation. This benefits total soil structure by helping to prevent compaction. Castings also act as storage units for nutrients such as nitrogen and carbon. Moreover, as earthworms burrow, they secrete mucus from their bodies to aid in tunnelling activity. A mucus-lined burrow naturally contains a higher nutrient content than the surrounding soil.

How to Introduce Earthworms

Earthworm burrows improve soil porosity which increases the amount of water and air that get into the soil. Earthworms are sometimes recognized as ‘ecosystem engineers’ because they significantly modify the chemical, physical and biological properties of the soil profile. These modifications can influence the activities and habitat of other organisms within the soil ecosystem.

If you do not have many earthworms in your soil, introduce some of the practices described above. It is surprising how quickly they build up in favourable conditions.

Cut pasture sods from areas with high worm populations and transfer them to worm-free areas. New colonies will establish within a couple of years as long as there is plenty of organic matter and soil and climatic conditions are favorable. You must transplant pasture, not just worms. Do not try and transplant compost worms into agricultural soils. Species that thrive in compost will not survive the harsher conditions of paddock soils, which dry near the surface.

Earthworms are wonderful little creatures that will flourish within the best conditions. So, before introducing earthworms to farming or garden soil, conditions must be favorable for the survival of the earthworms. Such as, cultivated soil from older gardens are usually compacted, have poor drainage and structure and usually experience a shortage of organic matter. Moreover, earthworms should not simply be placed on the soil surface because they will be preyed on by birds or die from exposure to the sun.

If earthworms are to be introduced into the soil, the below guidelines should be followed;

Dig a few trowel depths holes for every square metre.

Earthworms feed on soil and dead or decaying plant remains, including leaf litter, straw and dead roots. They are the main agents in mixing dead surface litter with the soil, making the litter more accessible to decomposition by soil microorganisms. Animal dung is also an attractive food for several species of earthworms. The below farming practices provide food for earthworms.

Crop stubble – Stubble is a significant source of organic matter. Burning stubble destroys surface organic matter, and this will affect numbers. It is best to leave stubble to rot down and sow following crops into the stubble using aerial sowing, minimum tillage or direct drill. All these practices mean less cultivation, and this also encourages earthworms.

Earthworm casts cement soil particles together in water-stable aggregates and these can store moisture without dispersing. In favourable conditions they can bring up about 50 tones/hectare yearly, enough to form a layer 5 mm deep and one trial found worms built 18 cm thick topsoil in 30 years.

Earthworm burrows change the physical structure of the soil and they open up small spaces, known as pores, within the soil. When earthworms are introduced to soils devoid of them, their burrowing can lead to rises in water infiltration rates of up to 10 times the original amount. This brings soluble nutrients and water down to plant roots. Burrowing also improves soil aeration and improves plant root penetration.

Worms feed on plant debris and soil. Their digestive system focusses the organic and mineral constituents in the food they eat, so their casts are richer in available nutrients than the soil around them. Worm bodies decompose quickly, additional contributing to the nitrogen content of the soil.

Earthworms increase porosity as they move through the soil. Some species develop permanent burrows deep into the soil. These burrows can persevere long after the inhabitant has died, and can be the main conduit for soil drainage, mainly under heavy rainfall.

By fragmenting organic matter, and enhancing soil porosity and aggregation, earthworms can significantly increase the water-holding capacity of soils.

The channels created by deep-burrowing earthworms are lined with readily available nutrients and make it easier for roots to penetrate deep into the soil.

There are many factors affecting earthworm population dynamics positively and negatively. Soil organic matter (SOM), total soil nitrogen, available potassium, available phosphorous, soil texture and pH level are frequently regulated by the earthworm population.Disturbances in a natural system alter the habitat of soil biota and in some cases make the habitat unfavorable for them. The increased use of chemical fertilizers and chemical pesticides creates a threat to soil organisms. Soil cultivation may cause mechanical damage to earthworms or expose them to predation. In some cases, the machinery may create adverse conditions for earthworm growth, development, and fecundity. Some of the environmental and soil factors are responsible for the death of earthworms. The earthworms are present in the soil for thousands of years and making the soil productive and fertile. It is important to understand the effects of these factors on earthworms for sustainable management of the soil for the best growth and development of soil organisms for optimum output and sustained production. So, sufficient kinds of literature were reviewed for understanding the roles of earthworms in soil fertility and factors affecting their population dynamics.

Earthworms eat organic residue that needs to be present in sufficient quantity. The quality of residue is also important. Residue with a high carbon to nitrogen ratio is not very palatable for earthworms. Manure can help make it more palatable. Packed manure is an excellent food source for earthworms. In some cases, the residue has to undergo some weathering before earthworms can digest it. Topsoil dwellers need smaller particles than subsoil dwellers, which can use large leaves, for example. The placement of food becomes a critical issue for some earthworm species. Topsoil dwellers prefer small organic residue particles incorporated into the soil, but subsurface dwellers need residue at the surface of the soil.

Soil type – The soil environment in which earthworms live affect their abundance and distribution. Soil texture affects earthworm populations since it influences other soil properties like nutrients and moisture. Higher numbers of earthworms are found in medium and light loam soil compared to heavy clay, sandy and alluvial soils.

pH – Earthworms generally found in agricultural fields thrive at neutral pH value but can tolerate a pH from 5 to 8.

Soil texture – Earthworms choose soils with loamy texture. Coarse sand can be a negative factor either because these soils dry out more easily, or because the abrasive action of sand grains damages their skin. In some studies, clay soils had fewer earthworms compared to lighter-textured soils. The reason for this phenomenon is not clear.

Moisture – Earthworms commonly require adequate moisture for their proper growth and development. Water constitutes about 75 to 90% body weight of earthworms. They respire through moist skin and the blood capillaries on the surface should get enough moisture to perform the respiratory activity. Earthworm activity is determined by adequately available soil moisture.

What Earthworms Do in the Soil?

Role of Earthworms in Sustainable Agriculture

Earthworms play a major role in changing the physical structure of soils by producing new aggregates and pores, which improves soil tilth, infiltration, aeration, and drainage. Earthworms produce binding agents responsible for the development of water-stable macro-aggregates. They improve soil porosity by mixing and burrowing soil. As they feed, earthworms participate in nutrient cycling, plant residue decomposition, and redistribution of nutrients in the soil profile.

Earthworm burrows act as a channel for plant growth and as pathways for root elongation, especially in compacted zones typically found in deeper soil layers. It makes the soil porous, increasing the water infiltration rate, and reducing soil erosion. Some studies even report that earthworms release certain metabolites, such as vitamin B and vitamin D into the soil, which are good for the growth of plants. Various studies also report that earthworms can convert barren land into fertile land and increase agriculture output. The presence of humic acids and plant growth hormones in vermicast can increase crop yields in both natural and managed ecosystems. The application of vermicompost with chemical fertilizers and integrated nutrient management reduces the use of chemical fertilizers in the field. The use of these organic amendments can improve the growth of plants in a range of ways; the number of leaves, seed germination, root biomass, fruit abundance, number of seeds, and overall yield. It also improves the nutritional quality of crops by increasing sugar, oil, and protein compounds.

These little creatures in the soil must be preserved at any cost to ensure they continue to provide their invaluable services to humankind.

Role of Earthworms in Soil Fertility

You should not miss this: Organic Watermelon Farming.

Role of Earthworms in Soil Fertility

Earthworms play a key role to improve soil fertility in a variety of ways. For example, earthworms bring up the nutrients from deep in the soil and deposit them on the soil surface as castings, hence counteract the leaching of nutrients. Earthworms mix soil layers and combine organic matter into the soil. This mixing allows the dispersion of the organic matter through the soil and makes the nutrients held in it available to plants and improves the fertility of the soil. Earthworms contribute to soil fertility by improving soil structure, mixing and tilling the soil, increasing humus formation, and increasing the available plant nutrients.

Earthworms eat a large amount of litter but only a small fraction of digested material (5 to 10%) is assimilated by the earthworms and the rest are excreted out in the form of earthworms cast which is rich in NPK, micronutrients, and beneficial soil microbes. Bacteria in the earthworm gut destroy harmful chemicals ingested by worms and also break down organic wastes. Auxin is a plant growth regulator produced in earthworm castings that stimulate roots to grow faster and deeper. Nitrogen fixation in casts is comparatively higher than in soil due to the presence of nitrogen-fixing bacteria in the earthworm gut and also in earthworm casts. Nitrogenase activity in casts is also higher thus contributing to higher nitrogen fixation in casts than surrounding soil.