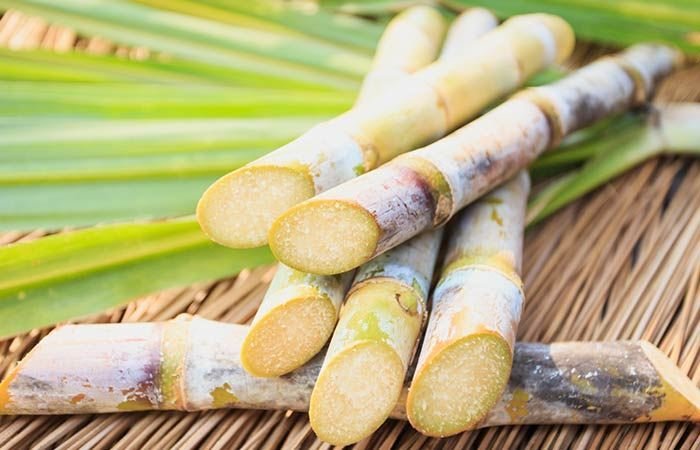 Sugarcane belongs to the family Gramineae, is a widely grown crop . Sugarcane is one of the most important agro-industrial also cash crops of    . Organic farming is a holistic management system that improves and promotes the health of agro-ecosystem related to nutrient cycles, biodiversity, soil microbial, and biochemical activities. It emphasizes management practices involving substantial use of green manuring, organic manures, and management of diseases and pests through the use of non-synthetic pesticides and practices.

A Step by Step Guide to Organic Sugarcane Farming

Sugarcane being a widely spaced, long duration, high input requiring crop fits well in the organic farming system. As a common understanding, organic farming is a production system which avoids or largely excludes the use of pesticides, chemical fertilizers, and growth regulators. 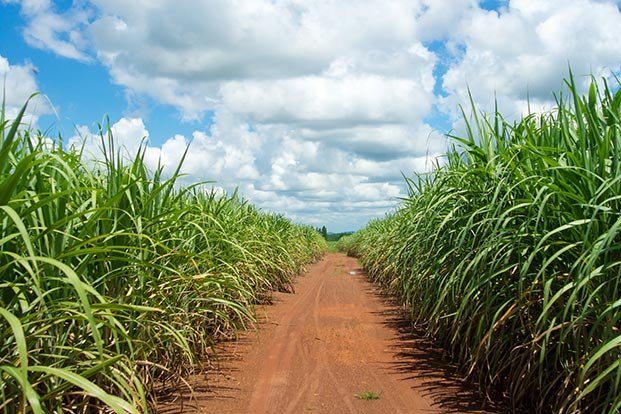 Sugarcane can be mostly cultivated in temperate zones; productivity is much higher in tropical climates. A long, sunny, and hot (32°C to 38°C) growing season with moderate to high levels of rainfall (1100 and 1500-mm total), combined with a cooler (12°C to 14°C) and dry harvest season is ideal. The amount of sugar accumulated in the dry weight at harvest is highly variable and based on the climate conditions in the various phases of the plant’s growth.

Sugarcane can grow in various types of soils like loamy, sandy, and clay soils, as well as both alkaline and acidic soils. A well-drained loam with a pH value of roughly 6.5 is perfect, but mechanical factors, such as soil compaction, are much more consequential to crop success than soil composition and pH value. Medium to fine-textured, deep, rich in organic matter status, well-drained, having a pH value between 6.5 to 8.0 is perfect for Sugarcane crop. Growing Sugarcane on shallow, coarse-textured soils will result in poor yield. The Sugarcane crop is sensitive to soil salinity and sodicity

Sugarcane is clonally or vegetatively propagated, to ensure consistent cultivar characteristics. Planting is generally the most expensive procedure in the growing season.

Stalk sections, called “setts,” “billets,” or “seed pieces” containing one or more buds are generally planted in late summer, rooting, and developing into a stand over winter. In this time, the rooting plants are very vulnerable to rot and predation and are thus often sprayed with insecticide and fungicide before being placed in the seedbed.

Row to Row Spacing of Sugarcane

In this method, shallow (8 to 10 centimetres deep) furrows are opened with a cultivator or local plough at a distance of 75 to 90 centimetres. There should be suitable moisture in the field at the time of planting. The setts are planted in the end to end taking care that one three budded sett falls in each running 30 cm length of the furrow. After these furrows are covered with 5 to 7 cm, so field and soil are levelled by heavy planking. In some tracts  the cane is planted by this method.

In this method, furrows are made with a Sugarcane ridger around 10 to 15 centimetres deep in northern  and around 20 centimetres in south    . Setts are planted end to end in the furrows and covered with 5 to 6 centimetres soil, leaving the upper portion of furrows unfilled. Instantly after covering the setts into furrows. This method is practised in Peninsular and parts of eastern particularly in heavy soils.

In some coastal areas as well as in other areas where the crop grows very tall and the strong winds in rainy season cause lodging of cane, the trench method is adopted to save the crop from lodging. Trenches at a distance of 75 to 90 centimetres are dug with the help of by manual labour or ridger. Trenches must be about 20 to 25 centimetres deep. After this previously prepared mixture of fertilizers (NPK) should be spread uniformly in the trenches and mixed thoroughly in the soil. Instantly after this, trenches are filled up with loose soil as in case of flat sowing. The tractor-drawn Sugarcane planter is a suitable device for planting cane in trenches.

Sugarcane needs regular irrigation at different stages. Provide shallow wetting with 2 to 3 cm depth of water at shorter intervals in the initial stage. During the later stages of tillering, maturity phases, and grand growth, the irrigation intervals can be increased to 8 to 10 days. Irrigation of Sugarcane crops through a drip system with fertilizer nutrient solutions could be adopted so that crop nutrition, as well as water requirements, could be met together.

On organic Sugarcane cultivation, weeds are primarily controlled by the below factors; 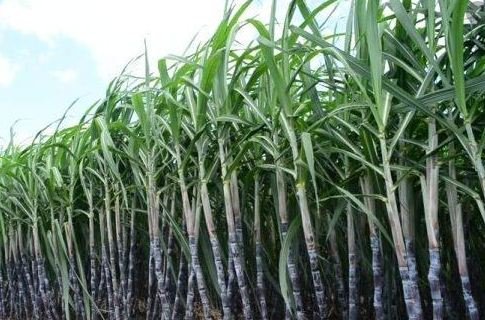 The application of organic manures for maintenance of soil at a high fertility level is almost important. Organic manures improve the chemical, physical as well as biological properties of soil. Organic manures by 20 to 25 tonnes/hectare are to be applied in different forms like Compost, Farm Yard Manure, or Dung Manure. Press mud can also be used as organic manure by 5 tonnes/hectare mainly useful in saline-alkali soils. Sugarcane trash can be used as mulch and sprayed with 100 kg Single Super Phosphate, 80 kg urea, and 10 kg decomposing culture/hectare for better decomposition. Sugarcane trash can also be mixed while making organic manure along with press mud and the use of earthworms for preparing vermicompost.

Apply cattle manure or compost 10tonnes/hectare or press mud 5t/hectare or calcium carbonate 750kg/hectare or dolomite 500kg/hectare. Also, the following fertilizers as N: P 205: k20 kg/ha are also suggested. Apply organic manures such as cattle manure/compost/ press mud as basal dose preferably in furrows and mix well with soil before planting. Apply dolomite/lime/ calcium carbonate in the field before the final preparation of the land.

The perfect method is to cultivate Sugarcane in a crop rotation system, yet for economic reasons, this is often difficult. So, the good self-tolerance of Sugarcane, the planting of legumes, the creation of sufficient compensatory tracts and niches, as well as a comprehensive fertilization management system all have to help replace an absence of crop rotation on organic cultivations.

On older plantation methods, a covering layer of legumes can rapidly be achieved by sowing directly after the harvest. The re-growing Sugarcane and seeds will form a compact, green mass that can be lightly worked into the soil after 3 months before the seedbed is prepared for the new Sugarcane. At sites with strong growth of weeds, it may be worthwhile planting a 2nd  type of rapid-developing green manure plant. If no machines are available to sow directly, then it may help to break over the Sugarcane and subsequently apply 1 or 2 sowings of green manure plants. The green manure plants must be competitive, and able to suppress any weeds that may appear. They must be non-climbing varieties, as these would be harmful to the Sugarcane cultivation.

Sowing legumes in the middle rows;

The gaps between rows and mechanization must be adapted to each other so that directly following the harvest, rapid-growing legumes can be sown in the in-between rows. These will die off after the Sugarcanes have appeared.

Like every single crop, Sugarcane should also be protected from disease pests. Below are some of the major diseases and pests, and their control measures:

Early Shoot borer – Trash mulching along with proper water management and light earthing up on the 35th day. Release of 50 fertilized Sturmiopsis parasite/acre when the crop is at the age of 45 to 60 days.

In Sugarcane, intercrops like potato, cowpea, chickpea, green gram, watermelon, wheat and many other crops can be tried, as there is wide spacing between rows. Based on the location-specific factors, different intercrops may be tried.

When and How to Harvest Sugarcane

Collection and harvesting of the cane should be either mechanical or manual. It has been found that when the cane is harvested and gathered mechanically, by the combined harvester, or manually cut and collected and then grab loaded into large tractor-trolley/trucks. The maturity of Sugarcane is usually recognized by the lower leaves gradually withering up and leaving progressively fewer green leaves at the top. A ripe cane, out across with a sharp knife, shows against sunlight a slight sparkling in its flesh in contrast to the more watery cut surface of an unripe cane. If the grower can maintain and use a hand sugar refractometer, the testing of maturity would be easier.

As far as possible harvesting Sugarcane must be carried out avoiding extremes of weather. In sub-tropical, it has been shown that spring harvested plant crop- would result in a better ratoon then that obtained by harvesting in the autumn season. Sugarcane crop is harvested after attending maturity, usually, it starts from Oct and continues till May in sub-tropical states wherein Tropical states harvesting starts from Dec and continues till May.

Harvesting starts when the leaves turn yellow (or when the optimum sugar content of 15% has been reached, that can be tested in the field with a hand refractometer). Very different kinds of techniques are used for organic Sugarcane-based on the country and local conditions, (from automated combine harvesters to cutting by hand and transport via ox and cart). Sugarcane is still generally cut by hand (machete), whereby the stem is cut down close to the soil. The cane leaves and the tip is also cut away. When using heavy machinery care must be taken that the soil is not wet.

Pumpkin Farming in Polyhous for Profit