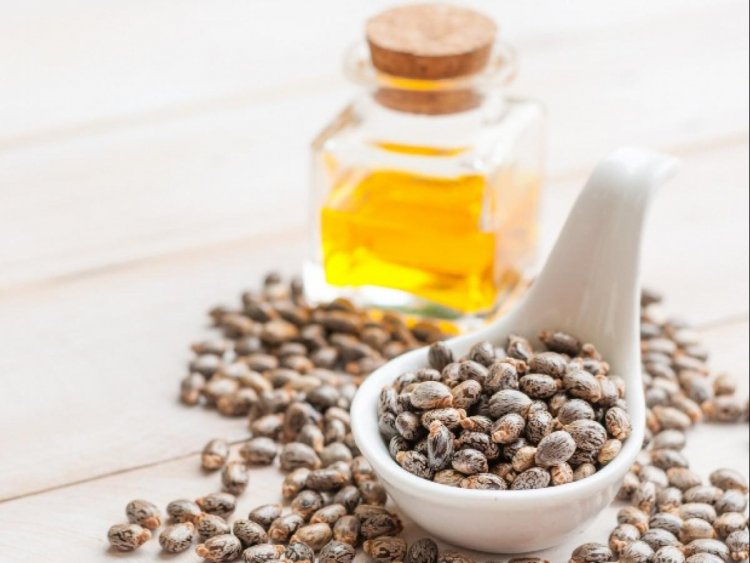 The Castor crop belongs to a member of the Euphorbiaceae family. The cultivated types are dwarf annuals. Castor crop is grown mainly for the seeds and oil. Castor is a plant that produces seeds or beans. Castor oil is formed from ripe seeds that have had their outer covering (hull) removed. Castor oil has been used for medicinal purposes for centuries. Castor plant is very easy to grow and is resistant to drought, which makes it an ideal crop for the extensive semi-arid regions globally. Castor oil is all-purpose oil that is extracted from the seeds of the Castor plant. It has many uses including manufacturing brake fluids, paints, and pigments. Also, it is used for making soaps, inks, washing powders, and textiles. It is used for flavoring food in the food industry. Castor oil is extracted from Castor oil seeds by mechanical pressing or solvent extraction.

A Step by Step Guide to Organic Castor Seed Production

Castor seeds are mostly cultivated in Gujarat, Karnataka, Rajasthan, Tamil Nadu, and Andhra Pradesh Brazil, China, Thailand, the Philippines, and Pakistan are the major producers of Castor seeds. The production of these countries accounts for more than about 96.2% of total global production. Department of Agriculture officials have predicted a good price for the organic Castor oil in the market. Though, the government has allotted funds exclusively for vermicomposting units to enable farmers to cut costs and earn profits. More and more farmers are taking up natural farming ways because of its many such benefits.

Castor crop is an important industrial non-edible oilseed crop. This seed contains 45 to 47 % non-edible oil, which is used for medicinal, domestic, and industrial purposes. Generally, Castor bean seeds are 8 to 15mm long, 6 to 9 mm wide, and 4 to 8 mm thick. Seeds for planting must be of high quality, good germination rate, and ideal moisture content. The Castor crop is cultivated around the world for its non-edible oilseed. It is a perennial crop but is grown as an annual for economic purpose. Castor crop is cultivated in the arid and semi-arid regions of the world. The crop duration is 4 to 5 months. Castor is sown in July/August and harvesting commences around December /January. 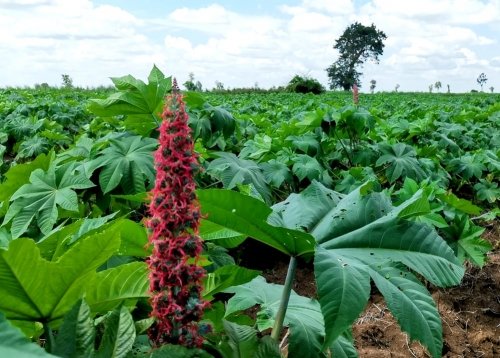 Castor plants have a well-developed root system with thick horizontal plant roots. The stem is erect, circular in section, partially hollow, and smooth with good branching. The stem is red or green or with shades of both. Leaves are alternate, large, and palmate with 5 to 11 lobes acuminate margins notched or indented. Castor seed is the source of Castor oil, which has a different variety of uses

The varieties of Castor change depend on the branching habits of the plant, stem color, the nature of capsules like smooth or shiny, and the size of the seed.

NPH-1 (Aruna), GAUCH-4, and TMVCH are some of the high yielding Castor varieties.

Newly released Castor hybrid varieties for cultivation in Tamil Nadu is TMVCH by Oilseeds Research Station of the Tamil Nadu Agricultural University (TNAU) Tindivanam. This hybrid matures in 160 to 170 days. Its seeds have 51.7% oil. It is susceptible to semi looper pest and resistant to wilt and grey mould.

Castor is a C3 pathway plant that grows optimally at constantly high-temperature levels of 20-26°C but can tolerate temperature levels between 0° and 40°C. In colder areas, it grows well if the summers are sufficiently warm. It is a pioneer plant that is growing in flood zones, abandoned farmland, and along roads. About 500 mm of rain is required between planting and harvesting Castor but it can grow in areas with lower as well as much higher rainfall. Depending on the variety it requires a 140 to 180-day growing season. Under severe water stress, no seeds are set and too high air humidity increases pest and mould problems. About 30 to 60% humidity is considered ideal.

Castor crop can be grown on a wide range of soils, provided they are fairly deep and also well-drained. Heavy clays, with poor drainage, and marshy soils are unsuitable for Castor crop. The suitable soils for Castor are deep, moderately fertile, with slightly acidic conditions pH level 5.0 to 6.5. Though, excessively fertile soils are not desirable, as they favor excessive vegetative growth at the expense of seed yield. Castor crop does well in the soil which is not fit for valuable commercial crops.

Castor can tolerate a pH level of 8.0 but at this pH, the soil structure and soil physical properties will become the important limiting factors for Castor cultivation. The soil sample was collected from each plot, after the harvest of the crop at a depth of 0-15 cm and used for determining the pH, EC, organic carbon, and nutrient status. Waterlogging is tolerated for short periods so the soils should be well-drained. Sandy and clayey loam is preferred. Nitrogen is the important nutrient determining seed yield. Though, excessive amounts of nitrogen lead to heavy vegetative growth without increased seed yield. Castor shows little response to phosphorus.Castor is a Kharif season crop and sown in the July – August months. It can be grown in arid and semi-arid regions with less rainfall and it is harvested around December – January months.

How to Sow Castor Seeds

Castor is mainly propagated through seeds. The selected seeds for planting must be healthy and come from prolific mother plants. In mechanized countries, seeds are planted about 4 to 7.5 cm deep in rows 1 meter apart; and about 50 cm apart within rows. In un-mechanized countries, seeds are planted about 60 by 90 cm apart that prefer larger varieties. About 10 – 12 kg of seeds is required per hectare.

Seeds are treated with Carbendazim at 2 gm/kg of seed for preventing some seed-borne diseases. Then, soak the seeds in water for about 20 hours.

For good growth, Castor crop requires fine seedbed with loose subsoil up to 45 cm depth. In fields selected for Castor seed production, give deep summer ploughing to break the hard subsoil facilitates easy root penetration, and attain effective weed control. For obtaining required tilth plough the land once again as soon as pre-monsoon showers are received followed by 2 to 3 harrowing using either blade or tyned harrow.

Castor seeds should be treated with 1g Bavistin or 3 g Thiram/kg of seeds for controlling seed and soil-borne diseases.

Farmers are required to purchase the hybrid seed from an authorized registered agent and ensure its viability. Though, they need not renew the seed stock of their improved varieties every year. Using certified seed once obtained from authorized agencies or sources, interested farmers can easily meet their requirement of quality seeds and maintain the varieties for at least 3 to 4 years without any appreciable deterioration.

A plant population of about 55,500/hectare is optimum for rain-fed Castor in all regions. For achieving required plant stands in drylands, a seed rate of about 10-15 kg/hectare is sufficient depending on seed size. If conditions are favorable and the crop growth period is prolonged due to irrigation, adopt wider row spacing and a low seed rate corresponding to a seed rate of about 5-6 kg/hectare. Such a practice not only reduces Castor seed cost but helps to cover a larger area per unit time.

For the application of organic manures, spread 12.5 t/hectare of FYM or compost evenly on the main field before the last ploughing and incorporate it into the soil by working a country plough. Apply 30 kg Sulphur/ hectare through gypsum at the time of the last ploughing for higher Castor yield. And, do not leave FYM or compost exposed to sunlight as nutrients will be lost.

Also, Castor can be planted as a perennial crop. In that case, the Castor plants are cut back rigorously after the canopy is closed and they grow too big. It is important to choose the right variety. This has to be done according to the climate, soil, and seasons in the area to be planted. Planting needs to be timed such that seeds can dry on the plants for at least 2 months.

Planting should be done when the soil is thoroughly moist. The germination process is slow, taking 1-3 weeks. About 2-4 seeds are used per hole and thinned to 1 plant per hole after emergence.

Like with any other crop, Castor must be rotated. Castor crop is rotated with Finger Millet, Groundnuts, Cotton, Dryland Chillies, Tobacco or Horse Gram. Usually weeding is required 2 times which makes it more labor-intensive than some other crops. Also, it makes the soil more vulnerable to surface erosion.

The fertilizer dose recommended for Castor crop is 40 N, 40 P, and 20 K kg/ha. Castor seeds need plenty of nitrogen, especially during their early development. A hectare with 1,600 hills requires complete fertilizer at the rate of about 30 grams per hill. Unbalanced nitrogen application encourages the development of foliage at the expense of flower and seed formation.

By using balanced nutrients through organic sources such as farmyard manure (FYM), vermicomposting, and neem cake are prerequisites to sustain soil fertility and to produce a maximum crop yield. Application of chemical fertilizers along with enriched organic manure and bio-fertilizers can help in nourishing the living entities of soil, the better holding of nutrients slow, release, and help in soil transformation.

The required quantity of different organic materials like farmyard manure, poultry manure, vermicomposting, and coir pith compost were subjected to enrichment process by adding them separately, to 50% and 100% of the recommended dose of P fertilizer, thoroughly mixed and heaped. Then, the heap was covered with polyethylene sheet and incubated at 80% moisture for 45 days to obtain an enriched form of organic manures such as enriched farmyard manure (E-FM); enriched poultry manure (E-PM), enriched vermicomposting (E-VC), enriched press mud compost (E-PC) and enriched coir pith compost (E-CC). 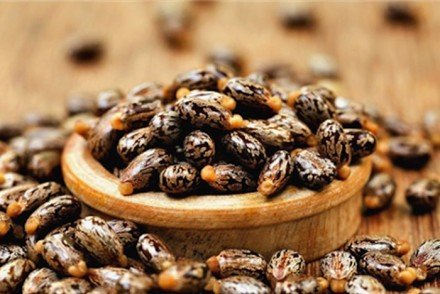 The Castor semi-looper and the capsule-borer are the serious pests in the Castor crop. Then, spraying 0.1% Carbaryl on the crop will give an effective control on these pests.

Control – Spraying the infested plants with 0.05% Malathion or monocrotophos (0.05%) chlorpyrifos (0.05%). Early stages neem oil by 5ml/lit can be spray on the undersurface of the leaf. Economic threshold level 8-10 adults/leaf or 20 nymphs/leaf.

Control – To control early-stage larvae, spray neem seed kernel extract (NSKE) 4% or Spray Chloropyrifos 2.5ml or monocrotophos 2ml or Quinalphos 2ml or neem oil 5ml in one lit of water. As the grownup larvae move down to the soil to hide during day time, poison bait placement at the base of the plant helps in killing the larvae. Economic threshold level 5-10% infected plants.

When and How to Harvest Castor Beans

The harvesting process can be done when one or more capsules show signs of drying. Harvesting is done when capsules turn yellowish. Though, all the capsules do not mature at the same time. Generally, 2 to 3 pickings may be needed for harvesting the entire crop.

The harvesting process may be done by hand methods or be completely mechanized. The improved crop varieties mature in about 150 to 180 days. The crop yield depends on the cultivation practices and climatic conditions etc.