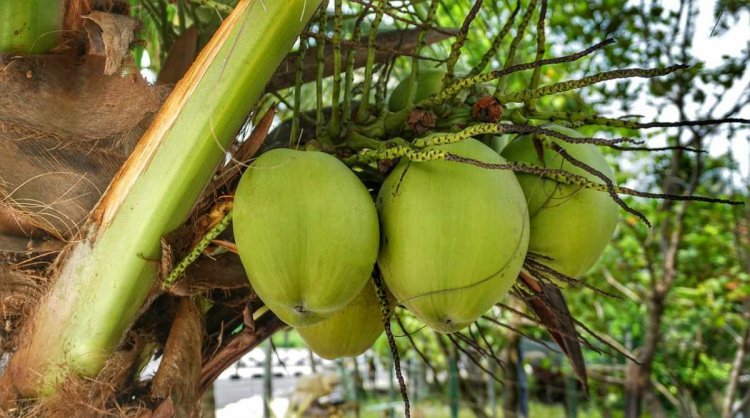 Hello friends, we are here today with a topic of high density coconut plantation. Coconut (Cocosnucifera) plays an important role in the agrarian economy of   and the Coconut tree belongs to the palm family. Coconut is the fruit of the coco palm, a tree widely distributed through tropical regions. The Coconut palm is an essential component in the homestead system of farming on the west coast of India. Coconut oil also used in the manufacture of soaps, hair oil, cosmetics, and other industrial products. Now, let us get into the process of high density coconut plantation.

A Step by Step Guide to High Density Coconut Plantation 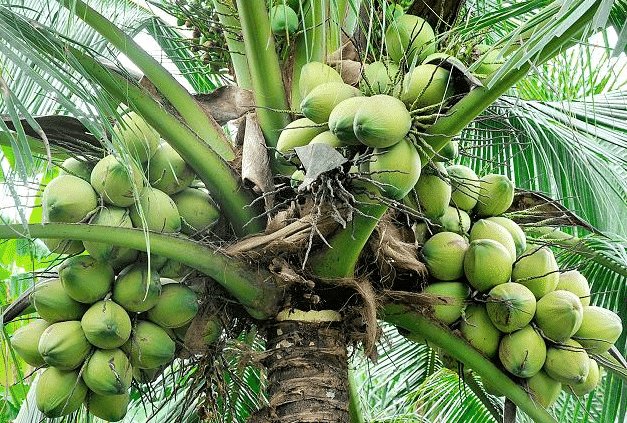 Usually, Coconuts are expected to have originated from the India-Indonesia region. It refers to the entire palm; it is botanically a drupe and not a nut. The inner flesh of the Coconut is an important part of the food for the people of the tropics and subtropics areas. Then, this drupe is considered highly versatile due to its use in a wide range of products. This is different from other fruits because it contains a clear liquid in the endosperm and is generally called Coconut milk. In India, Coconut finds significance in religion and culture and is commonly used for various rituals.

High density Coconut planting means to increase the plantation of the same species of plants per unit area without affecting the quality of fruits. It increases production and returns per unit area; it is efficient land use and resources like light, water, and fertilizers, efficient pesticide application. The main aim of the high density plantation is to meet essential productivity requirements by balancing vegetative and productive growth without affecting the quality of the fruit.

When Coconut is grown in monoculture it can be an advantage to plant at reasonably high densities for two reasons. They are;

The high-density planting helps to increase Coconut production and improve quality in the long term. Generally, high density planting requires agriculture machinery from the initial stage to the final harvesting stage. Those are;

There are several varieties of Coconuts famous throughout southern . These varieties can be divided into two types. They are;

Coconut tree thrives best at 27°C. Coconut tree prefers tropical weather and a humidity of 60% is feasible. There have been cases where Coconut is grown in hot weather conditions as long as the humidity is conducive. A rainfall of 2000 mm is ideal for high yield in Coconuts. For Coconut plantation, water stagnation, poor soil conditions, and rocky areas are not suitable.

Coconut tree thrives in sandy soil. Clay soil is not feasible for Coconut farming. Alluvial, Laterite, Red Sandy loom soil, and Coastal soil are the most preferred soil types for Coconut cultivation. Soil pH level should be between 5 and 8 for optimal growth of Coconut trees and high yield. It’s also important to note that there must be no water retention and proper drainage of water should be maintained. The moisture must remain in the water for a longer period without flooding the area for more than a few hours a day. Coconut tree also requires full sunlight, though partial shade is tolerated. Remove canopies and shade trees from the surroundings where Coconut trees are planted. Laterite, alluvial, red sandy loam, and coastal sandy and reclaimed soils are the soil types that support Coconut plantation in India.

For Coconut cultivation, soil with a minimum depth of about 1.2 meters and fairly good water holding capacity is preferred. Proper moisture supply through well-distributed irrigation is essential for Coconut plantation. The selection and inclusion of crop components are influenced by the climate and by household preferences, and dietary habits.

If the land is sloppy, soil conservation methods must be adopted. If the groundwater level is high planting can be taken up in the mounds. Coconut-based high density multispecies cropping system with Cocoa, Banana, Elephant Foot Yam, and Heliconia crops has been established with high net profit.

Coconut propagation has no dormancy and requires no specific treatment for germination. However, the speed of germination changes within and among Coconut ecotypes and varieties. Dwarf and some Tall Coconut varieties, such as the Malayan Tall, germinate while still on the palm. Other varieties like the West African Tall and most Pacific Coconut populations can take up to 8 weeks to germinate. Generally, 90% of seeds will germinate. Then, the remaining 10% seeds are discarded, failing to germinate due to the pathogenic infection of the seed interior caused by the fracture of the shell, after sprouting in the first 3 months of planting. During the germination process, the Coconut haustorium starts to develop. Under accurate conditions, this germinated Coconut will grow into a seedling.

The Coconut palm is propagated by seeds. Since the productivity of the palm mainly depends on the quality of the seedlings, utmost importance should be given to select the best nuts. The mother palm must be within the age group of about 20 to 40 years.

The important features of a mother plant are;

Seed nuts are sown in the nursery beds of 1 to 1.5 meters wide with an average spacing of beds being 75 cm during the commencement of the rainy season. Nursery beds with poor drainage have raised beds for proper germination. The beds should be drenched with chlorpyriphos by 0.05% before sowing to avoid termite problems.

Seed nuts are soaked for 24 to 36 hours before sowing. The seed nut is planted horizontally with wide segments at the top or vertically with the stalk end facing outward. Seed germination is expected within 60 to 130 days after sowing for tall plant varieties and within 30 to 95 days for dwarf plant varieties. The seedlings are ready for transplantation after 5 months from sowing.

Weather plays a major role in the growth of Coconut palm, the first few years. Also, Coconut requires a bit of water, but not too much during the first few years. The saplings must not be drowned in water. High monsoon areas must plant Coconuts right after the monsoon ends. August/September is the right planting time in Kerala. For areas with the lower monsoon, Coconut plantation takes place right before Monsoon. Tamil Nadu, Karnataka, and Andhra Pradesh are parts that have lower rainfall and plant their Coconuts around June / July. It’s the same for Gujarat and other northern parts. The plantation time is not always general. If you are in coastal areas with high rainfall, we recommend that you plant Coconut saplings right after the monsoon.

The Coconut grower wishing to maximize pasture growth as well as yields of copra must use the least number of palms per hectare required to realize this goal. For tall Coconut, varieties recommended spacing about 7 × 7 m to 9.1 × 9.1 m and palm densities from 120 to 200 trees per hectare. Where pastures are established under palms at closer spacing and higher densities then light transmission values will be lower.

High Density Planting (HDP) is the planting method, different types of plants with different height and light intensities. In high density utilize the maximum unit area. Since plant different kinds of plants, we can obtain yield throughout the year. It also helps the farmer to remain distinct from others in profitable marketing. In the future, we have to switch over to high density through Multiple Cropping Systems and Multi-Tier Systems. In some conditions, Multi-Tier System in high density planting is most suitable. Hence this process fulfils the satisfaction of the planter and helps him to increase profit. Multi-Tier System is a planting of growing crops together example is Coconut + pepper + pineapple + grass.

Multi-Tier System is a modern method of crop cultivation involving the planting of various trees and ease of mechanized operations. It makes maximum use of land to achieve high crop yields in early periods of orchard life along with ease in its management. It is successful in crops like Coconut, coffee, banana, and areca, etc.

Multi-Tier System in High Density Coconut Planting would help the planter in increasing profit. High density planting keeps the planter engaged all through the year. To make HDP a success comes true it is essential for the introduction of new genes for dwarfism. Growing dwarf Coconut plants more suitable for high density planting would help the planter to take a non-linear jump in the profit rate. Growing Coconut as monocrop is not an efficient way of using natural resources. Also, in India, Coconut is primarily a crop of small and marginal farmers.

Regular irrigation also helps to increase the fruit set and improve size. Though, stagnation of water and ill drained conditions should be strictly avoided. Areas with low rainfall should consider irrigation and the farmer need to take into consideration soil type, palm type, and weather condition.

An adult palm tree requires an average of about 700 liters of water once a week. Also, irrigation applies to matured established plants of 2 years and above. Use drip irrigation method and apply seawater if available.

When irrigation is given through drip, and it results in saving of water. Drought in Coconut gardens can be managed by adopting soil moisture conservation practices such as the burial of husk, application or composted coir pith, and FYM or farm waste in the Coconut basin by taking 20 to 30 cm trench in the basin area of 1.8 meters radius.

The major pests and diseases of Coconut palm include;

Controlling Measure – For controlling the measure of pests in Coconut suitable remedial should be adopted when required. Providing good drainage and feeding the Coconut palms with balanced nutrition is useful to keep palms healthy.

The major diseases of Coconut trees include the following;

Controlling Measures – Initially, learn the symptoms of Coconut palm diseases and adopt a suitable controlling measure for controlling them as sooner they appear in the field. Most diseases can be prevented through well-drained soil and avoidance of damage to tree trunks, particularly during transplanting. The use of insect traps, chemical sprays, and the removal of materials that can be habitats to diseases causing organisms has proven to be effective to control diseases and pests of Coconut palm.

When and How to Harvest Coconuts

Coconuts take around 1 year to ripen fully. If you want to harvest the fruit for the Coconut water, the fruit is ready 6 to 7 months after emergence. Coconut trees are productive throughout the year. However, the yield may change from season to season. Though, due to practical economic reasons, harvesting for copra production usually takes place every 45 to 90 days. Usually, harvesting must be done at their tender age for water purposes. Also, the harvesting frequency depends on the palms yield.

The Yield and Profit in High Density Coconut Plantation

The yield of Coconut palms depends on different factors like the selected variety, soil type, irrigation facility, application of manure and fertilizers during the cultivation.

The high density planting systems have given a high yield per unit area as well as high net profit in a 15-year-old plantation. In Coconut cultivation, the high density systems give a high yield as well as high net profit. Though, the profit margin between the standard coconut density 64 palms/acre and the highest density Coconut planting 97 palms/acre is Rs. 673/- taking into account the cost of fertilizer, its application cost, and packing charges.

Which state produces a large number of Coconuts?

Tamil Nadu is the largest producer of Coconut in   and enjoys a share of 31% of total Coconut production.

On a commercial basis, the cultivation of Coconut trees is profitable and a source of sustainable income.

How can we improve Coconut farming?