Pear is one of the most important fruit crops of temperate regions and it belongs to the family Rosaceae. Pear fruits are tasty with a pleasant flavor. Dwarf Pear fruit trees are suitable for growing in a pot or planting in the ground. Usually, dwarf trees produce fruit a bit earlier than standard-size trees, as do Asian Pears. Generally, Pear trees are among the most long-lived of all orchard fruit trees. In this article we also covered the below topics about growing Pear trees;

A Step by Step Guide to Growing Dwarf Pear Trees 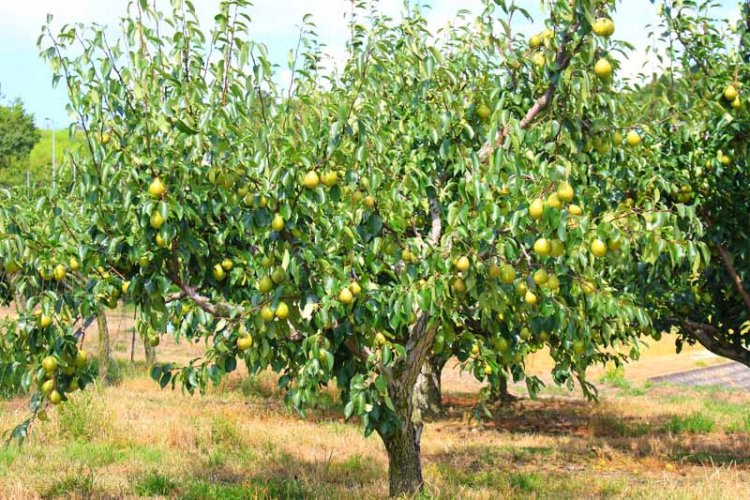 Dwarf fruit trees are ideal for small spaces. Some dwarf fruit trees need staking to help them become established and then grow upright, but this is a quick and easy task made possible with tree stakes. Fruit trees planted in particularly windy areas may require staking even if you are not planting dwarf sizes.

Pear trees have upright growth habits, and trees grafted onto seedling rootstocks can be tall. They are spaced 12 to 15 feet apart in the home garden. Generally, dwarf Pear trees are produced by grafting Pear varieties onto selected dwarfing rootstocks. The result is a tree about half the size of seedling-rootstock trees. Also, quince roots are very susceptible to fire blight, a bacterial disease. Normally, dwarf Pear trees are planted 8 feet apart.

The Pear tree is an important fruit crop of the temperate region. It can be grown at 1,700-2,400 meters above mean sea-level. Due to its wider adaptability of climate and soil Pear trees can be grown in subtropical to temperate regions. Pear is cultivated in Himachal Pradesh, Jammu, and Kashmir, and Uttar Pradesh in India.

Easy care – Pear tree pruning takes a fraction of the time compared to a full-size tree. It’s also easy to protect those trees during the winter. Then, covering the tree with a net during the fruiting season will be an easy enough job and ensure that you harvest your crop instead of the birds. No need for a huge net and ladders.

Fast Fruiting – Dwarf fruit trees reach fruit-bearing maturity fast, usually within a year or two. No more waiting 5 years until you get to harvest fruit.

Bartlett Pears are prized for several reasons and it is one of the most well-known of all Pear tree varieties. They are extremely productive. Bartlett Pears produce big yields of extremely juicy and sweet Pear fruits and they do so early on in their growing cycle. They can bear fruit as early as in their third full year of plant growth. Bartlett Pear trees are self-pollinating, but they will produce much better if given a partner. Bartlett Pears are hardy in zones 4 through 8, and usually are ready to harvest in August.

Seckel Pear trees are the smallest. The Seckel Pear variety is referred to as the dessert or candy Pear for its sweet flavor. Seckel Pears are called candy Pears for their sweetness. Dwarf Seckel trees will grow about 6 to 8 feet wide and around 10 feet tall when fully mature.

Generally, Cordon Pear trees are pruned to about 30 inches tall. Cordon trees are suited for small spaces as the tree is trained to a horizontal plane rather than allowed to form a bush or tree.

Cordons produce fruit on short side shoots. Cordons should be pruned regularly during the growing season to keep their shape and size. The leaders on these trees are trained at an angle of 45 degrees by being tied to two wires stretched at heights of about 2½ and 5 feet between posts rising about 7 feet out of the ground and then placed at 10-foot intervals. Cordon Pear trees must be planted at a distance of 1½ to 3 feet apart in rows 6 to 10 feet apart. Cordon trees are planted at about 1 year old.

Pear trees can be grown on a variety of soil ranging from sandy loam to clay loam. It gives the best results when grown in deep, well-drained, fertile soil without having any hardpan up to 2-meter depth. The pH level of soil should not be more than 8.7.

The pear tree is not very fastidious to its soil requirements. It is doing well in foothills where soils are light sandy to gravel and it prefers deep well-drained loam soils with a pH of less than 8.7. Alkaline soils are unfit for Pear cultivation. High pH soils show iron chlorosis and zinc deficiencies in the Pear trees. 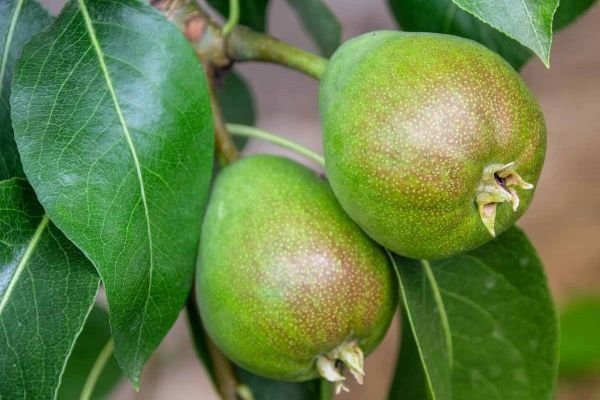 In general, the pear tree thrives in cold and wet climate conditions, where there is winter cold along with a cool summer. It is the popular Pear varieties that need about 400 to 800 hours of cold (exposure to temperatures below 7 °C) to have a regular fruit development. Abundant sunlight is necessary, as it significantly affects the color of the pear fruit. Most popular tree varieties thrive in regions where the temperature rarely increases well above 32°C. Some Pear farmers make use of big fans to cool the orchard when the temperature exceeds a certain point.

Planting is completed in January Month and one-year-old plants are used for planting. Dig a pit of about 1x1x1 m sizes and fill pits one month before planting in November month with topsoil and add well rotten FYM (farmyard manure) and then allow it to settle. After that, the pit must be filled with subsoil mixed with 10 to 15 kg of well-decomposed cow dung, and then drench the pit with Chlorpyriphos by 50ml/10litre of water per pit. After planting, irrigation must be done. For planting Pear, square or rectangular planting can be adopted. In hilly areas contour system of planting is used for Pear cultivation.

The distance between Dwarf Pear trees is 12 to 15 feet apart. Before planting a Pear tree, clear land and remove remains of earlier plants. Levelled land properly and then give a gentle slope for water drainage.

Few Pear trees are self-fruiting trees. This tree yields best when it is matched with a cross-pollinator. Plant at least two cultivars.

You will want to have at least two trees of different varieties for cross-pollination and a proper fruit set. If you have a small area where you can grow a Pear tree, consider using the espalier form, training the young branches to grow horizontally along wires or a vertical structure. Also, you can choose to plant dwarf Pear varieties like ‘Bartlett’, ‘Moonglow’ and ‘Williams’. Pear trees can be trained in the open center form while they are young. It is very important to plant at least two varieties from the same group (the same flowering time) to ensure pollination. (Pollination occurs when bees or other insects carry pollen from the flowers of one tree variety to the flowers of a second.). When you choose a Pear tree, the plant tag or label will tell you if the tree is self-fertile or list other Pear varieties that are pollinators.

For Pear cultivation, a well-distributed average rainfall of about 75 to 100 cm is required throughout the year. It requires regular irrigation after transplantation. In summer irrigate crops with 5 to 7 days intervals whereas increased irrigation interval to 15 days in winter months. In January month stop irrigating Pear trees. Give flood irrigation to bearing trees in the summer season will help to increased fruit quality and size.

The first year is a critical time for new Pears. To prevent the tree from dying, it should be watered twice a week in light soil and once a week in clay soil. Be sure to soak the entire root system deeply, this will take about 40 to 50 minutes. For best growth and production, Pears should receive at least 1 inch of water a week. During dry spells water is mandatory. If not properly watered the tree during droughts Pear fruit may drop prematurely. Then, keep at least 4 feet around the Pear clear of grass and weeds to reduce the competition for water.

One of the most common problems found on Pear trees is fire blight disease, which is caused by a bacterium named Erwinia amylovora. Copper sprays may not get rid of the disease. It can be difficult to control and pruning of diseased parts can be done in the summer and winter season to help stop the infection. Be sure to disinfect tools before and after pruning lest you spread the disease accidentally.

Scab and other fungal diseases can cause problems for Pear trees. Fire blight can be mainly controlled by trimming off and destroying affected areas as soon as possible. Codling moths can destroy crops of young fruits; Trichogramma wasps can be used to control them, but insects are less of a problem with Pears than with other tree fruits.

When and How to Harvest Dwarf Pear Fruits 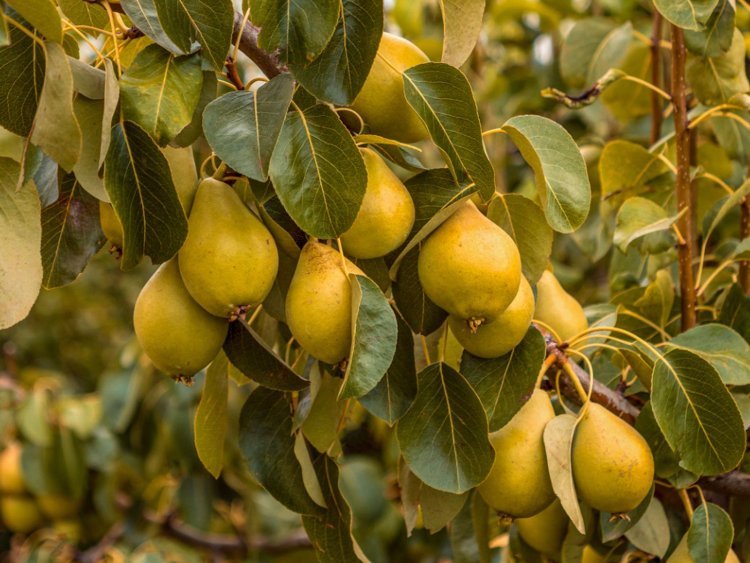 The Yield of Dwarf Pear Fruits

How big does a dwarf Pear tree get?

Dwarf Pear trees will be 8 to 10 feet tall and spread about 6 to 7 feet wide.

How much time does it take for a dwarf Pear tree to bear fruit?

Pears produce the fruits 3 years after planting, while they won’t produce a full crop for 5 to 7 years. Dwarf trees produce fruit a bit earlier than standard-size trees, as do Asian Pears.

Do Pear trees have invasive roots?

Under some growing conditions, the Pear trees can be considered invasive, and you don’t want these Pear tree roots near houses or other structures.

Pear trees do need some sun, but they’ll crop in partial shade.

Flowering Pear trees grow quickly up to 24 inches per year.