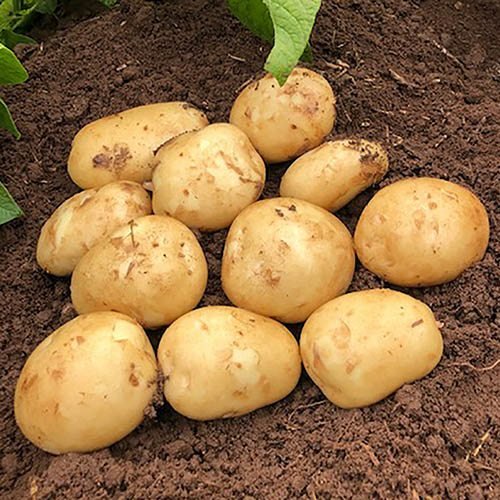 Well, if you are going to plant potatoes in outdoors, backyards, indoor contianers, you must be aware of

There are many varieties of Potatoes and each variety has a different maturity period. The minimum time period for growing Potatoes is 70-120 days.

3.How many Potatoes can you get from one plant?

It is considered that under weed free growing conditions the minimum Potatoes produced is about 50 pounds for every 2 pounds of Potato seeds planted. Therefore, roughly it can be estimated that 10 foot row of Potatoes can approximately produce 15 to 60 pounds of Potatoes.

The best time to plant Potatoes is during the early spring season. It is not advisible to plant Potatoes during cool or frost conditions.  The ideal time would be from late winter to late spring. Different regions in the country have different planting time such as in Gujarat and Orissa  Potatoes are gown as rabi  (October and November) crop, whereas Potatoes in Deccan plateau is grown as both rabi and kharif crop.

5.Can a whole Potato be planted for getting new plants or is it necessary to cut the Potatoes before planting?

Seed Potatoes that are really small can be used whole for planting, otherwise if they are larger than 2 inches, then they should be cut into pieces of 1½ of 2 inches before planting them.

Not all seed Potatoes need to be cut into small pieces, only those which are larger are cut with a sharp knife just before two days of planting. Each piece of Potato to be used as planting material should be at least 2 inches square.

7.How much fertilizer is needed for Potatoes and what are the best fertilizers?

The main objective of earthing up is to aerate the soil, destroy weeds and keep the soil loose for the Potatoes to grow. During the entire Potato farming cycle, at least two or three earthing up should be done at an interval of 15-20 days. As soon as the plants grow to a height of 15-25 cm, first earthing up is done and the second one is done when the tubers grow as emerge out of the soil. Generally the second earthing up is done to cover the tubers from being exposed to the outer atmosphere. Earthing up in the Potato farm area is done using double mould plough ridger or by a tractor drawn culti-ridger.

10.What plants are grown in rotation to Potato plants?

Each region or state has a different sequence of crop rotation using different crops between Potato farming intervals and these are:

It is estimated that a Potato farmer in    can make approximately around Rs 52,000 from one crop cycle of the Potato.

It is considered that the Potato plants need at least a half day of full sunlight along with some partial shade. The tubers should not be exposed to direct sunlight otherwise this would cause the tubers to turn into green colour. On an average at least 6 hours of sunlight is required by the Potato plants provided the area has well drained soil. Partial shade or areas that receive less direct sunlight is also suitable for Potato farming, but with lower yields.

It is not always recommended, but few farmers prefer to sprout the seed Potatoes before planting them. This process of sprouting is often referred to as green sprouting or pipping. The seed Potatoes to be used for planting are initially spread under the sunlight such that the temperature is around 70˚F for a week or two. This enables to produce sprouts on the Potatoes, which can be used for planting. The average sprouting time is estimated to be 14 to 28 days if the Potatoes are directly planted into the soil with proper warmth.

How deep should one plant Potatoes?

The cut tubers or the whole of Potatoes are planted to a depth of 5-10 cm at the center of the ridge in the farm. The trench of depth should be around 8 inches tapering at the bottom.

Shallow trenches are created for planting Potatoes. These trenches are separated by a distance of 2 or 3 ft. The seed Potatoes are planted at a distance of 12 inches and covered with 3 inches of soil. When the Potatoes sprout and emerge as shoots of length 10 to 12 m, the soil around them is mound against the plants with a hoe such that the stems of the plant are buried halfway.

The planting distance used during Potato farming is 50 x 20 or 60 x 25 cm such that the Planting density or seed rate is 1.40 kg for 10 sq meter area. The spacing is not specifically recommended for Potatoes but it is advisible to plant the tubers or seed Potatoes so that there is enough space for them to grow. The general recommendation is made on the seed rate, which is expected to be around 2 tonnes per hectare.

17.How much water is required by the Potato plants?

Relatively high amount of soil moisture is required for Potato plants. It is considered that a 120-150 days Potato crop needs 500 to 700 mm, i.e. 20 to 27.5 inches of water. Sufficient water should be supplied to the plants during the growing period, otherwise it would cause the plants to produce low yield. In the region with low water availability, it is recommended to direct the water for maximum production rather than supplying water to a larger area. Sprinkler irrigation system is used in the Potato farm because these plants have shallow roots and providing water frequently produces high yield.

Good vegetative growth of the plant is observed at a temperature of 24˚C and tuber growth is observed at 20˚C. The soil type required for Potato farming could be either saline or alkaline, but loose in texture. Properly aerated soil with good organic matter and draining property is chosen for Potato cultivation. The ideal pH range of the soil should be 5.2 to 6.4.

How much manure is required by the Potato plants and when should it be added?

The minimum amount of farmyard manure required for Potato farming is 25-30 tonnes per hectare. This should be supplied to the soil or mixed evenly into the soil base at the time of last ploughing.

The store brought Potatoes are not generally used for planting, but rather make good compost. The main reason of not using them as planting material is because these store Potatoes are treated with chemicals to prevent sprouting and yield.

The time of harvest for Potato crops is of extreme importance because the tubers keep developing until the vines die. The main crop of Potato is harvested from August to October i.e. approximately 75 to 120 days from planting. Another indication of harvest time of Potatoes is when the crops bloom. Harvest Potatoes immediately when bloom is observed.

Generally, farmers wait until the foliage of the plants wither by themselves, indicating complete maturity of the crops. The Potatoes from withered plants are removed by ploughing or digging and the skin of the Potato is scraped with fingers so as to understand if they are mature. If the skin doesn’t come off easily while rubbing then its the right time to harvest.

How many eyes does a seed Potato have?

An average sized seed Potato has many eyes and can be used to produce a maximum of six seed pieces. It should be clearly noted that each seed Potato should have at least one eye; having more eyes is acceptable.

The most common insect pests found on the Potato plant are Potato beetles, wire worms, cut worms, leaf hoppers, tuber moth, mites, Potato cyst nematode, root knot nematode etc. the best possible ways to control the infestation of pests on the crops is by practicing crop rotation, observation and monitoring, hygiene, small number of pests can be hand-picked and discarded and treating the plants with pesticide during severe infestation

Highly prevalent disease of Potato plant is bacterial wilt followed by early blight, late blight, scab and virus disease. The following can be done to minimize the occurrence of the diseases:

Harvesting can be done depending on the requirement, i.e. some small new Potatoes are purposely harvested when they are small and tender. Such crops are ready for harvest within 2 or 3 weeks of planting. The harvesting should always be done on a dry day. The tubers should be dug very carefully such that they are not damaged. The big size Potatoes are harvested only when their foliage is dry or die back has occurred. For these big sized varieties the foliage is removed and the Potatoes are harvested after 10 or 15 days so that they develop thick skin.

A spading fork or plough is generally used to harvest Potatoes. The use of these farm equipment should be gentle so that the tubers are not injured or bruised.

The Potatoes should be kept at a temperature of 6 to 8˚C with proper ventilation and humidity level of 85 to 90% such that they have a shelf life of about 2 to 3 months. The General storage life of Potatoes is about 1 or 2 weeks at normal room temperature. It is believed that Potatoes should never be stored in a fridge because this increases the amount of sugar in them and produces high levels of a chemical compound called acrylamide.

How can one hill Potatoes in a raised bed?

Generally, when Potatoes are grown on the ground, the earth around the plants is dug and hilled up next to the plants, but hilling up or earthing up is done by adding soil to the bed such that only the top leaves of the plants are visible.

The minimum height to which Potato plants can grow is about 60 cm or 24 inches. The minimum depth at which the seed Potatoes are buried is 3 inches, so the depth of the raised bed should be at least 6 to 12 inches deep to facilitate the growth of the tuber.

32.How do you grow potatoes in containers?

Some tips to grow potatoes in containers are:

33.What type of containers can be used for potato farming?

34.How do you fertilize potatoes in containers?

The potato plants are considered to be light feeders and too much fertilizer application for container grown plants will enhance the foliage growth rather than tuber growth.  A modest amount of granular organic fertilizer added to the potting mixture is sufficient to keep the plants healthy. For the production of better potatoes, fish emulsion with kelp is sprayed every three or four weeks until the harvest season.

35.What should be the size of the container for potato farming?

36.Can I grow potatoes inside or indoors?

Yes, it is possible to grow potatoes in containers placed inside the home or indoors, but there are a few things to remember about growing them in a shady place.