Hello friends, can we discuss today about Cucumber farming in polyhouse (Kheera) for maximum profit? no problem, we can help you with it. Cucumber is a widely cultivated plant in the Cucurbitaceae family and the scientific name is Cucumis sativus. Commercial production of cucumbers is generally divided into two types. “Slicing cucumbers” are formed for fresh consumption. “Pickling cucumbers” are very small. And these Cucumbers produced for eventual processing into pickles. Slicing cucumbers are generally larger and have thicker skins while pickling cucumbers are usually smaller and have thinner skins.

Cucumbers have been grown in    for food and medicinal uses since ancient times, and they have long been part of the Mediterranean diet. The Cucumber is eaten raw or is served as a salad or cooked as a vegetable. The seeds of Cucumber are used for oil extraction which is excellent for body and brain. Cucumbers have 96% of water which is good in the summer season. The Cucumber plants are large-sized, leaves are hairy and are triangular and flowers are yellow. 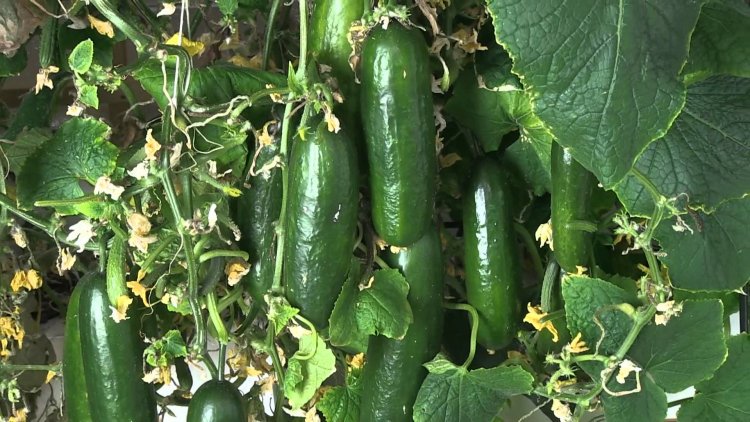 Polyhouse cucumber production is very popular in many areas of the world. Sandy loams rich in organic matter with good drainage and pH level from 6.5-7.5 are ideal for Cucumber cultivation. This Cucumber crop requires a moderately warm temperature.

Cucumber crop can be sown in a variety of soils ranging from sandy loam to heavy soil. But a loamy soil which is rich in organic matter and has well drainage system is best for the Cucumber farming in polyhouse.

The Cucumber can be grown in several types of loose soil as long as it is well-drained and with sufficient organic matters. Cucumber is a moderately salt-tolerant plant (somewhat less than the melon plant). If the concentration of salts in the soil is too high, Cucumber plants absorb with difficulty the irrigation water, the growth is slower, the stem is weaker, the leaves are smaller and darker in color and the fruits are twisted. If the salt concentration is too low, the effect will be reversed, giving more leafy plants, which are more sensitive to various diseases.

For Cucumber plantation, it requires a well-arranged and weed-free field. To bring soil to a fine tilth, 3-4 ploughings should be done before planting. Farm Yard Manure such as cow dung is mixed with soil to enrich the field. Then beds are prepared to have a width of 2.5m and at the distance of 60cm.

A polythene polyhouse should be selected with plenty of light and ventilation and preferably sited so that plants are grown in north-south facing rows. The height of the polyhouse to the gutters should preferably be over 4 m.

Relative humidity for polyhouse 85% is optimum. Use a hygrometer to verify the relative humidities. High humidities increase leaf diseases such as botrytis and powdery mildew, and the plants can be too busy. Ventilation may be adjusting the vents to maintain optimum temperatures and humidities, especially in the afternoon. This will decrease diseases such as botrytis and increase the uptake of nutrients. Do not over-ventilate as this can reduce the relative humidity to a low level. This can reduce yields and fruit could have gummy ends.

It is preferable to maintain the temperature above 14°C in the winter season. Temperatures over 40°C or less than 14°C are unfavorable to Cucumber production. The absolute minimum temperature range is 5°C.

Direct seeding is the preferred process for sowing Cucumbers as they do not transplant well. Seeds must be sown after the last frosts and when the soil has warmed to at least 15.6°C (60°F). Sow seeds 1.3 to 2.5 cm (0.5–1.0 in) deep, thinning to a spacing of at least 30 cm (12 in) between plants after germination. Cucumbers can be seeded on hills or mounds of soil to encourage warm soil and better drainage. In this instance, seeds must be sown on hills in groups of 4–6 seeds, allowing 1.2 m (4 ft) between each group in all directions. Cucumber seeds should germinate in 4 to 13 days depending on the soil temperature.

Planting is done in pits of 2-3 cm depth in which are placed 3 to 4 seeds. It is thinned after leaving 1 to 2 plants only.

Trellising and tying the plants is a must to keep them in an upright position. It will improve general air circulation and will make it easier to take advantage of the sunlight and to undertake all of the care necessary with relation to Cucumber crop production (pruning, harvesting, etc.). This will benefit the final production, fruit quality, and disease control.

The seed rate of Cucumber:

In polyhouse, the seed rate of Cucumber is 1.0 kg for one acre of land.

How to treat cucumber seeds:

Before sowing seeds, treat them with the appropriate chemical to protect them from disease and pests and to increase viability. Seeds are treated with [email protected] before seed sowing.

General care and maintenance for Cucumber farming in polyhouse:

Cucumber vines are sprawling and need plenty of space to grow. Vines can be trained to produce on a trellis or fence. Providing burpless varieties with vertical support allows the Cucumber fruits to hang loose and grow straight. Cucumbers require a continuous supply of water and where drip irrigation is not being used, Cucumber plants must be watered deeply once per week, providing at least an inch of water. Shallow watering or watering less frequently will decrease fruit yields. Mulches could be used to conserve soil moisture and black plastic mulch has the benefit of warming the soil.

How to control weeds in cucumber crop in polyhouse:

Weed can be controlled by hand-hoeing and controlled by chemically, use [email protected] per 150 liters of water. Use glyphosate on weeds, not on crop plants.

The drip irrigation system is improved than most other conventional soil irrigation systems because it can be used to control crop growth by regulating the supply of water and nutrients. The drip system allows reduced relative humidity (RH) in the greenhouse, because not all the soil is irrigated and because the system is compatible with the use of white polyethylene film as light-reflecting mulch. In countries suffering from lack of good irrigation water the drip irrigation method has a very important feature expressed by high water efficiency leading to very remarkable water savings.

Polyhouse cucumbers grow quickly and should never be allowed to suffer from lack of water or nutrients. The nutrient uptake rate by polyhouse cucumbers is very high. Generally, one acre of cucumbers (8,000 plants) may require in the range of 25 pounds of nitrogen, 5 pounds of phosphorus, and 35 pounds of potassium per week during peak fruit production. Fertilizer management practices will, therefore, have to be planned to assure that plant requirement are satisfied to achieve excellent yields of high-quality fruit. Methods and fertilizer materials used to supply plant nutrients differ with the growing system used and grower preference.

For growth in soil beds, apply all of the potassium and phosphorus required and a small amount of nitrogen before planting. Minor element deficiencies discovered during crop growth should be treated with foliar sprays. Animal manures, used as a pre-plant fertilizer, can supply part of the nutrients required but only about one-third of the nitrogen and phosphorus in them becomes available to the plants during the growing season. Excessive utilize of manures will increase soil salinity and retard plant growth. For soils that are acid due to fertilizer use or natural soil conditions, lime and other nutrients can be required and will need to be incorporated before planting.

The major diseases in Cucumber farming are;

Cucumber harvesting may begin 50 – 65 days after planting. Harvesting is done 3 to 4 times per week. In a well-managed Cucumber crop, harvesting period extends up to 12 weeks.

Cucumbers must be harvested from the plant when they are still immature and green in color. Mature fruits are yellow color and the flesh is often tough with woody seeds. The size of Cucumbers at harvest depends on the different variety of the Cucumber being grown and what it is to be used for. Cucumbers are generally picked when they are less than 5 cm (2 in) long whereas burpless Cucumbers for slicing must be allowed to reach about 4 cm in diameter. It is very important to remove any fruits nearing maturity to ensure the plant remains productive. Their rapid growth means that Cucumbers can need harvested every couple of days.

Tomato Farming in Polyhouse for Profit – A Full Guide

Aquaculture In Cambodia – A Full Guide