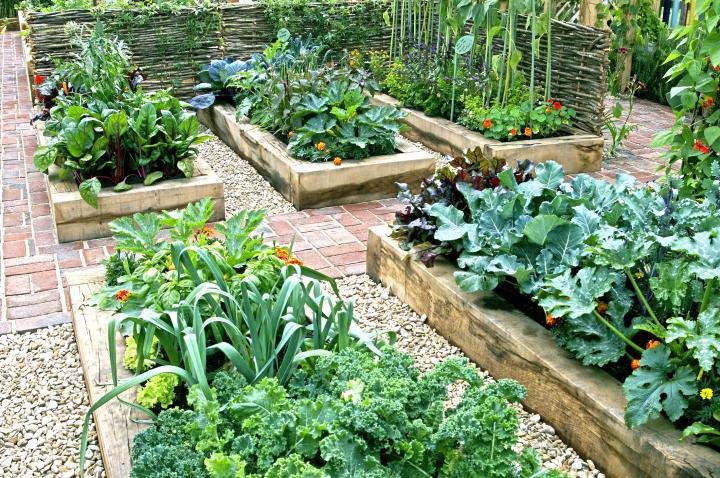 What is raised bed farming?

Raised bed farming is the agricultural technique of building freestanding crop beds above the existing level of the soil. In some cases, Raised beds are covered with plastic mulch to create a closed planting bed. Raised beds may be rectangular in shape or an irregular shape. Raised beds can be formal or informal in their design. Raised bed farming does not need to be very deep to be productive. In this article we also discuss below topics;

A step by step guide to commercial raised bed farming 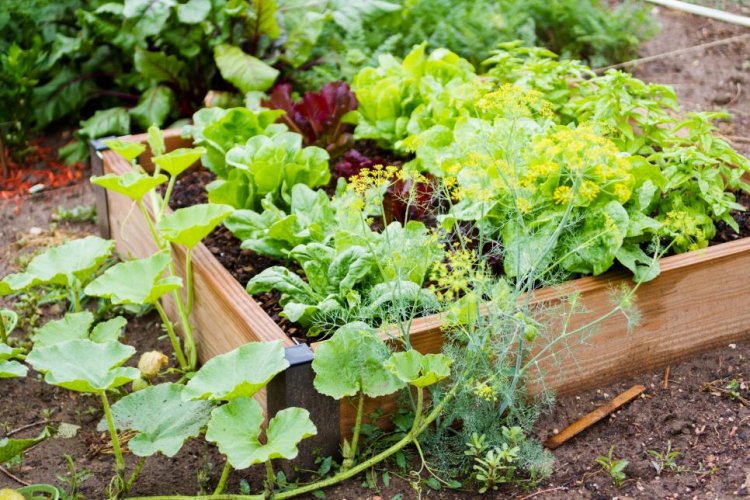 Raised beds produce multiple benefits. Raised beds extend the planting season, reduce the growth of weeds, and since one does not walk on the raised beds, the soil is not compacted, and the roots have an easier time growing. The use of compost and the close plant spacing in the Raised bed result in higher yields. Simply you can create Raised beds by heaping soil up into a pile, or by using boxes to enclose and contain garden soil. Raised beds are also easier to maintain, particularly for people with limited mobility, and generally have less perennial weed pressure. The main disadvantages of a Raised bed system are that they tend to need more frequent irrigation and have a high initial cost of construction. By leaving these obstacles aside, Raised beds can be a great choice for almost anyone interested in vegetable gardening.

Reasons to use raised beds

Below are several reasons to use Raised beds;

Commercial farmers who are living in colder environments also benefit from Raised bed farming versus traditional techniques. A Raised bed lifts the soil out from the hard ground into smaller piles with trenches between. In spring, this allows more airflow to reach the soil so it warms up much faster. It does not matter if you want to grow vegetables, herbs, fruit, or flowers. Any industrial agricultural operation will benefit from incorporating with Raised beds.

A Raised bed is a way of setting up your soil for the easiest possible gardening. Instead of tilling up the soil from year to year to add amendments and fertilizers, gardeners regularly maintain their Raised beds by simply adding materials on top. Compost, manure, mulches, and other soil conditioners can go directly onto the top few inches of the soil without the need for backbreaking work. And also the soil is capable of doing its own tilling as worms and roots push their way through. While frequent tilling by human hands tends to deplete the soil structure, doing nothing builds up the organic component of your soil over time.

Raised beds allow you to control the soil. Whether you battle clay soil or you have experienced a soil-borne disease in your garden, raised beds to provide perfect soil conditions. Because of the framework of the bed, you control the content and structure of the soil, ensuring a nutrient-rich environment for your crops. It’s convenient to test the soil each season, by adding the necessary missing nutrients or compost to keep the soil healthy and productive.

When several raised beds dedicated to your kitchen garden; you can easily plan and practice crop rotation. Rotating crops can help to maintain soil health and thwarts pests that overwinter in the soil. As newly hatched pests emerge in the spring and find that their food source moved to another bed, they also attempt to relocate to the new bed. Fortunately, most of the pests will die along the way, victim to birds or other predators.

Raised beds may seem like pure vanity, but having nicer beds can have a practical purpose. Raised beds also make pathways just a little bit easier to maintain because there’s a definitive line between the path and the bed.

Mainly the areas prone to flooding, or in marshy yards, a raised garden bed may be the only way to have a full growing season. The most popular depth for a Raised bed is 11 inches, which is one inch below the sides of a 12 inches high garden box. For maximum crops, this is enough drainage and gives plants almost a foot of extra breathing room above wet conditions. Raised beds also tend to drain better in general, even in heavy rains.

Raised beds can prevent crops from becoming snacks for wildlife. Due to reinforcing the bottom of the Raised bed with a barrier, voles and gophers can’t access your tasty root crops, while a row cover can keep the cabbage worms at bay.

What is permanent raised bed?

Conventional farming of vegetables is normally achieved via temporary bedding, which is created at the beginning of every season.

The other option for farming with Raised beds in an urban environment, which is often considered preferable, is to build permanently Raised beds, which can be organized in a variety of ways. Permanent Raised bedding has been generally used for centuries in certain parts of the world where the rainy season is short and heavy, where extreme water can cause flooding and be harmful.

The best machinery to work with commercial raised bed farming;

Farmers use tractor attachments such as plastic mulch layers and bed shapers to create Raised beds on anything from a small family farm to commercial farms with thousands of acres. Bed shapers are used to arrange soil from flat land into raised crop beds, turning the soil as it shapes the bed. The size of the bed mainly depends on the crop being farmed.

As the bed shaper runs throughout the field, the soil is mixed and pulled up for the bed press pan to shape the soil into a tight, even raised bed. The bed shaper creates a set number of Raised beds mainly depending on the number of press pans on the implement.

Farmers also use a plastic mulch layer to install a layer of plastic on top of the Raised beds. This plastic layer helps as “mulch” to keep the soil from washing away when it rains and to give farmers improved control of moisture levels by keeping the rain out and using a drip irrigation system to water the crop plants from inside the plastic mulch. Farmers can also fertilize and fumigate the soil when shaping and prepping the beds before laying the plastic mulch to make rich soil and prevent weeds.

For constructing the Raised beds, there are no set rules. Many farmers are content to purchase kits from garden supply companies, while others venture to build their own. There are so many designs available in books and online, some of which are better than others. Ideally, Raised beds will be no more than 4 feet wide so that you can easily reach the center of the bed without stepping on the soil. After all these, one of the main benefits of having Raised beds is better soil structure and less compaction. As long as the beds are a suitable width they can be any shape and length you like.

In addition to the above, Raised beds need to be high enough to accommodate sufficient soil for plant roots. Aim to make beds 6 inches or taller. Many vegetable crops grow best if beds have at least a foot of soil to support their root systems. There are several options when it comes to construction materials for your Raised beds. If you choose to use wood, rot-resistant lumber like cedar, opt for non-treated, oak, or locust as there is concern that treated wood may leach heavy metals into the soil that could be taken up by plants. If you have treated lumber at your disposal, you can always line the beds with thick plastic to form a barrier between the soil and wood. Other worthy materials to consider for Raised beds include bricks, cinder blocks, rocks, and plastic decking material.

There are a wide variety of materials and styles that can be used to create Raised beds huge culture, bricks, reclaimed wood, straw bales, fallen logs, even concrete blocks the most prevalent style of a Raised bed is easily built from lumber. Armed with a drill, measuring tape, and level, constructing a Raised bed is fast and easy, even for those of us not known for our dexterity with drills.

A raised farm bed without support looks like a flat-top mound about 6 to 8 feet tall. It requires no additional materials except the enriched soil. This type is more commonly used in commercial farming and large-scale.

Alternatively, a framework made of plastic, stone, brick, or untreated wood surrounds a supported Raised bed. It appears like a planting box filled with soil. Supported Raised beds are more commonly used by home gardeners.

Site selection is more important in Raised bed farming. Vegetables require more sunlight; a bed for these plants should be located where it will receive full sun. Select a location that receives a minimum of 6 to 8 hours of direct sun. If that is not possible, select a site that receives morning instead of the afternoon sun. If it is challenging to locate a spot with required sunlight, try growing cool-season vegetables that tolerate shade, such as lettuce, cabbage, and broccoli. The growing medium or the soil in the raised bed and the location determine how well a Raised bed will drain. Always locate the Raised bed in a location with proper and suitable drainage. Setup the Raised bed in a level area or one where slight modifications will make it level. 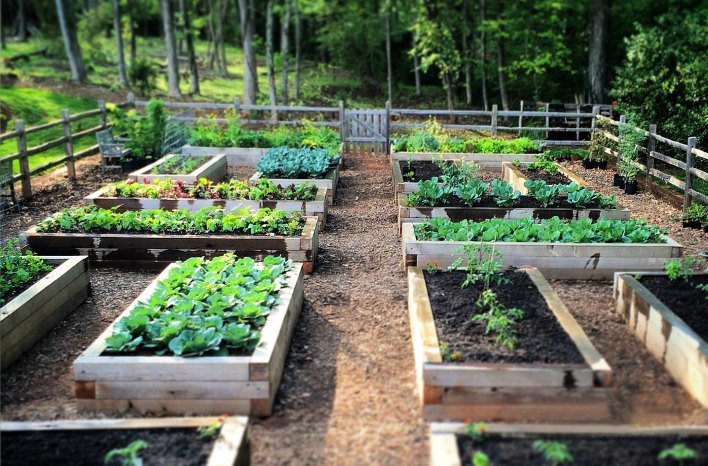 Growing medium to be filling in the Raised bed. Standard potting soil or commercial container mixes can be used as a growing medium for vegetables, but are usually too costly for filling large beds. The growing medium should be soil from a different location or a blend of soil, soil-less mix, and compost. If bringing soil from other locations, make sure that the soil is not infested with soil-borne plant pathogens or contaminants like pesticides, lead, etc. Likewise ensure that the compost is well done, mature, and does not carry too much salt. Mixing compost with the native soil in the beds will help create structure, improve drainage, add nutrients, and enhance the biology. When filling the bed, grade the soil so that it slopes somewhat away from the center of the bed to the edge, and away from adjacent structures. Use mulch around plants in Raised beds to conserve moisture and to control weeds.

How to irrigate a raised bed

Irrigating a Raised bed can pose problems if you do not consider it at the time of the design process. You can arrange a low-volume drip irrigation system using drip tape. Sprinklers work, but they can result in potential disease issues. Some machines used for farming Raised beds also lay down irrigation tape while making the bed. Large-scale farms benefit significantly from laying irrigation down while building Raised beds.

The size of raised beds for commercial famring.

You may be confused about what size to make Raised beds. The determining factor is that you essential to be able to access the beds from all sides. 3 to 4 feet wide is ideal. Technically, Raised beds can be as long as you want them to be. But limiting Raised beds to about 8 to 24 feet long makes it easy to practice crop rotation because each crop can be rotated to a fully new bed. This can prevent insect pests that may spread diseases through the soil in one long bed. Raised beds should be minimum 6 inches deep and up to 36 inches deep. If you have good soil the roots, beds will reach into that soil and continue to grow.