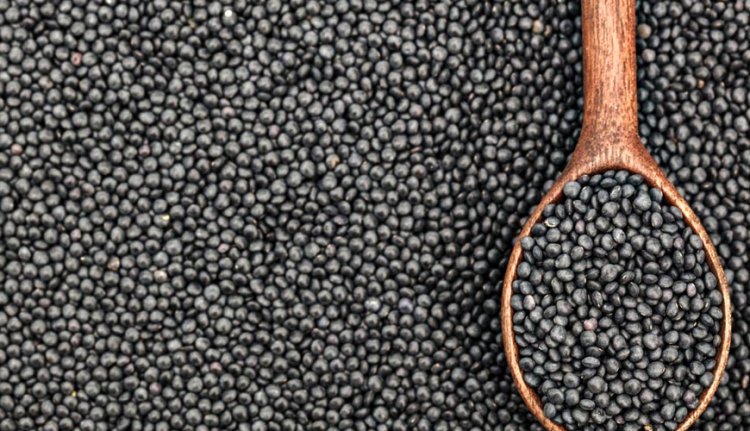 Black gram is also called as urad dal, urad bean, black bean, or black lentils. It is one of the important pulses crops, grown throughout the country. Black gram belongs to family Leguminosae. The Black gram crop is resistant to adverse climatic conditions and improves soil fertility by fixing atmospheric nitrogen in the soil. It is one of the most important pulse crops next to chickpea, lentil, and mungbean both in area and production. The plant attains a height of about 30 to 100 centimeters, with stem lightly ridged, covered with brown hairs, and much-branched from the base. The leaves are large, trifoliate, and are hairy, generally with a purplish tinge.

Black gram is an important pulse crop containing about 26 percent protein. The crop is resistant to adverse climatic conditions and is a good source of fodder. Black gram crop is a mini-fertilizer factory as it restores soil fertility by fixing atmospheric nitrogen and producing nitrogen equivalent of around 22 kg per hectare.   the largest producer as well as consumer of a Black gram and it is an important part of diet Black gram accounts for about 10 percent  total pulse production.

A step by step guide to Black gram seed germination

Black gram is scientifically known as Phasiolus mungo and it is known as Urad . its primary origin and mainly cultivated in Asian countries including Pakistan, Myanmar, and parts of southern Asia. About 70% of the world’s Black gram production comes from    and Black gram is a widely used pulse  with high phosphoric acid content. It is one of the valued pulses, due to its culinary values. It is an erect upright habitat with thick hair and flat nodules. This nutritious pulse has a strong earthy flavor.

Black gram is a bean that is widely grown in the   n subcontinent. It is considered the same species of mung bean. Seeds have a high content of carbohydrates, protein, minerals, fat, vitamins, potassium, niacin, calcium, iron, riboflavin and thiamine, and also amino acids. It has a short period of pulse crop and is self-pollinated. And probably the most well-known and high nutritional beans is the Black gram.

The pulse ‘Black gram’ plays an important role in the   n diet, as it has vegetable protein and supplement to the cereal-based diet. It contains about 26% protein, which is almost 3 times that of cereals and other minerals and vitamins. Besides, it is used as nutritive fodder, especially for milch animals. Black gram is important legume crop characterized by a relatively high content of about protein (25.67%), carbohydrates (5.4%), fat (1-3%), fibers (3.5-4.5%) and ash (4.5-5.5%), while calcium and phosphorus are 132 and 367 mg per 100 g of seed, respectively. The area under Black gram has gone down due to its lower yield, which is responsible for the scarcity of quality seed among several factors. To maintain increased productivity, seed quality must be maintained properly. Seed storage is a very important factor in which the seed qualities greatly depend. Without proper storage seed quality degraded rapidly with absorbing moisture from the surrounding environment, this invites different diseases. Different phytopathogenic seed-borne diseases are responsible for disease development, which attacks the Black gram plants during the seedling stage to maturity.

The proper storage of seed is an important factor in the proper production of seed or crop. Maintenance of high Black gram seed germination and vigor of seed from harvesting to sowing is the purpose of good storage of seed. Adequate provisions and facilities for storage are important components of the seed production program in all climatic regions. It is an annual pulse grown as a fallow crop in rotation with rice. Similar to the other pulses, Black gram, being a legume, enriches soil nitrogen content and relatively short (90-120 days) duration of maturity.

Optimum temperature range for Black gram plant growth is 27-30°C. A dry harvest period is desirable as this forces the crop to mature and also reduces the risk of weather damage. It comes up well on water-retentive soils but cannot stand saline conditions and alkaline conditions. It is more tolerant of waterlogging than moong bean. Plant growth and development of Black gram are greatly influenced by various environmental factors that are temperature, light, water, and nutrient availability. Under abiotic stress conditions, where variations of the above factors affect plant growth and plant development adversely result in a dramatic reduction of the crop yield.

During Kharif, it is cultivated throughout the country and it is best suited to rice fallows during rabi in southern and south-eastern parts of   . Black gram requires relatively heavier soils than a green gram. It can be grown on a variety of soils ranging from sandy soils to heavy cotton soils. The most ideal soil is a well-drained loam with a pH level of 6.5 to 7.8. Black gram cannot be grown on alkaline soils and saline soils. The land is prepared like any Kharif season pulse crop. Though, during summer it requires thorough preparation to give a pulverized free from stubbles and weeds completely.

How to identify genuine seeds Some farmers have run into huge losses after planting fake seeds leading to poor crop performance. The seed is of low quality and it can also be infected with diseases. Sometimes it is packaged in material resembling that of reputable seed companies to confuse the farmer. Certified seeds are packed in containers or packets which are clearly labeled and have the following information: Seed lot numbers to allow for easy traceability of seed lot in the event of crop failure, the weight of the seeds, name of the crop species and crop variety, packaging date, Seed merchant or company. Labeling and sealing of the containers or packets are done in such a way that seeds cannot be removed without damaging the seal.  Seed certification is very important as it is the process through which the government gives quality assurance on the seeds available to farmers.  The purposes of seed certification are;

The Black gram seeds germinate at a temperature range of 27°C–30°C. It is a matter of common observation that seed bulks of local races and even improved varieties used by small farmers have a significant proportion of damaged, shriveled, and undeveloped seeds, besides extraneous material.

In Black gram, seed-borne fungi, namely Rhizoctonia Solani and Alternaria sp., get associated and cause not only discoloration of the seed coat but also render such seeds non-viable. Therefore, healthy and clean seeds should be sorted out for sowing. This is true for improved types as well as for landraces.

Detailed observations reveal that it would be possible to realize a minimum of about 10% gain in yield by merely providing community seed cleaning and grading services, of farmer’s seed lots and also of improved varieties, within every cluster of villages.

The farmers should be given a guarantee that their products will be purchased by the department at a remunerative price. The handling of seeds, seed storage, processing, and subsequent distribution to the farmers in small packets needs consideration.

The seed rate and sowing of Black gram

A seed rate of the Black gram is 15-20 kg/ha for Kharif and 25-30 kg/ha for spring or rabi. Optimum sowing time mid-June subject to availability of moisture or rainfall.

Method of sowing of Black gram

Time of sowing of Balck gram

The seed treatment for Black gram

Black gram needs life-saving irrigation when there is a long dry spell and light irrigations are always beneficial. Each irrigation must be followed by hoeing for promoting aeration. In rice, fallows give 1 or 2 irrigations at 30 and 50 days after sowing for better crop yields.

The black gram should be harvested when 70-80 % pods matured and most of the pods turn black. Over maturity can result in shattering. The harvested crop must be dried on the threshing floor for few days and then threshed. Threshing can be done manually or by trampling under the feet of bullocks. The clean seeds should be sun-dried for 3 to 4 days to bring their moisture content at 8-10% to safely store in appropriate bins. A well-managed crop of a Black gram may produce 12 – 15 quintals grains/ha.

Is Black gram a lentil?

Black gram or Urad is a little black seed with a white interior. It is similar to a mung bean in size and shape but tastes different.

Is Black gram the same as black beans?

What season does Black gram grow?

The proper time of Black gram sowing in Kharif is the second fortnight of June (15to 30 June). In summer, sowing must be done from the third week of Feb. to the First week of April.

Black gram is a healthy pulse as it is rich in iron content and this helps boost the energy levels in the body and keeps you active.

Which soil is grown in a Black gram?

Black gram crops can be grown on a variety of soils ranging from sandy soils to heavy cotton soils. The most ideal soil is a well-drained loam with a pH level of 6.5 to 7.8. It cannot be grown on alkaline and saline soils.

The conclusion of seed germination of Black gram