Introduction to the applications and benefits of agricultural biotechnology

Agricultural biotechnology is a collection of scientific techniques used to develop plants, animals, and microorganisms. Biotechnology enables improvements that are not possible with the traditional crossing of related plant species alone. Agricultural biotechnology yields better results than traditional techniques while maintaining the stability and fertility of the soil. High yielding seeds considerably enhance the productivity potential and provide resistance from adverse environmental stress such as drought and salinity. They are mainly effective and relevant for a country like    that suffers from water scarcity and drought every year. High-yielding seeds protect crops from diseases and insects.

The agricultural biotechnology sector , particularly its plant biotechnology segment, is uniquely poised for the main process of transformation. Plant products of biotechnology approved for food use have been modified to have traits such as;

How is agricultural biotechnology being used?

Biotechnology provides farmers with tools that can make production very cheaper and manageable. For example, biotechnology crops can be engineered to tolerate specific herbicides, which make weed control simpler and more efficient. These crop production options could help countries keep pace with demands for food while reducing production costs.

Many other types of plants are now in the research and development stages. Though it is not possible to know exactly which will come to fruition, certainly biotechnology will have highly varied uses for agriculture in the future. Developers are using biotechnology to try to reduce saturated fats in cooking oils, reduce allergens in foods, and also increase disease-fighting nutrients in foods. They are researching ways to use genetically engineered crops in the production of new medicines, which may lead to a new plant-made pharmaceutical industry that can reduce the costs of production using a sustainable resource.

Though, genetically engineered plants are being developed for a purpose known as phytoremediation in which the plants detoxify pollutants in the soil or absorb and accumulate polluting substances out of the soil so that the plants can be harvested and disposed of safely. In case the result is improved soil quality at a polluted site. To produce hardier crops that will flourish in even the harshest environments and that will need less fuel, labor, fertilizer, and water, helping to decrease the pressures on land and wildlife habitats.

Importance and benefits of agricultural biotechnology

Plant biotechnology complements plant breeding efforts by increasing the diversity of genes and germplasm available for incorporation into crops and by considerably shortening the time required for the production of new cultivars, varieties, and hybrids.

Biotechnology can be a boon to   n agriculture in several ways. Crop damage can be minimized through disease and pest resistant varieties through reducing the use of chemicals. The   n pepper crop is now ravaged by the dieback disease, as the banana is being ambushed by the bunchy top disease, sorghum eroded by downy mildew, and the coconut is crippled by the wilt problem. Conventional plant breeding has little ammunition to deal with these problems expediently and efficiently.    has serious problems of the blast in rice, rust in wheat, leaf rust in coffee, viruses in tomato and chillies and leaf spot in groundnut across the country. These problems can be minimized in an ecologically-friendly manner with the development of genetically reprogrammed seeds designed to resist these disease attacks while minimizing or even eliminating costly and hazardous pesticide sprays.

The strategic integration of agricultural biotechnology tools into   n agricultural systems can revolutionize   n farming and usher in a new era in the countryside. Compared to the “green revolution”, the “gene revolution” scales neutral, benefiting big and small farmers alike. It is environmentally friendly. Therefore, it can be of great help to the smallest farmer with limited resources, in increasing farm productivity through the availability of improved but powerful seed. It can reduce his dependency on chemical inputs such as pesticides and fertilizer.    unequivocally needs the help of technologies to march into the next century with a vision for economic upliftment and prosperity for its two-thirds of populace dependent on farming.

The Government  Department of Biotechnology and other scientific agencies have done admirable work to deal with the safety issues of GM crops by developing a strong, reliable, and trustworthy regulatory mechanism. The existing biosafety framework now requires that all genetically modified organisms should undergo a rigorous review and safety assessment before their import, field testing, or release. The government should enhance its legal system by instituting penalties for those who do not follow the regulations, strengthen and enforce its anti-trust laws to prevent monopolies, and impose product-liability laws to force corporate responsibility.

Plant biotechnology is uniquely very important in this regard because it is;

Applications of biotechnology in agriculture

Bt Cotton – Bt’ stands for the microbe Bacillus thuringiensis and it gets activated only once it comes in contact with the alkaline pH in the insect gut when the insect ingests it. The activated toxin then binds to the surface of epithelial cells and makes pores in it. Then, this causes the cells to swell and lyse, eventually leading to the death of the insect.

Pest Resistant Plants – Several nematodes live as parasites on multiple hosts such as plants, animals, and even human beings. And a specific nematode ‘Meloidegyne incognitia’ infects the roots of tobacco plants. This causes a decrease in crop yield. To prevent this infestation, a novel strategy was adopted which is based on the method of RNA interference (RNAi).

New vaccines employing green biotechnology innovations are changing the processes of preventing illnesses, mainly in developing countries. Genetically modified crops have a significant contribution to the development of vaccines. Foods that are fruits, grains, and vegetables are engineered to carry antigenic proteins that are extracted from pathogens. When injected into the body and these antigens trigger an immune response and boost the resistance of the body against the pathogens. An example is an anti-lymphoma vaccine that’s obtained from tobacco.

The use of traditional methods such as cross-pollination, grafting, and cross-breeding to enhance the behavioral patterns of plants and animals is time-consuming. Artificial insemination, embryo transfer, and associated technologies are used in managing the reproductive functions of an animal and influencing the traits of the resultant offspring. Then, these improvements have increased agricultural productivity in developing countries and enhanced their capabilities to sustain the growing population.

Agricultural biotechnology is applied in the production of antibiotics for humans and animals. Animal antibiotics formed through this technology are low cost but equally as efficient as traditionally manufactured antibiotics. While these antibiotics are obtained from plants, a large quantity of the product can be obtained at a time. Also, there is the ease of purification and the risk of contamination is minimized as compared to the use of mammalian cells and culture media in antibiotics production.

In a bid to promote better human health, scientists have come up with ways to create genetically modified foods with nutrients that can help fight disease. A great example of such foods is the golden rice which has beta carotene, a major source of Vitamin A in the body.

The name of the rice comes from the color of the transgenic grain made from three genes they are two from daffodils and one from the bacterium. The genes are cloned to create the rice “golden.” People who eat this rice supplement their diet with the vitamin and other nutrients that may not be getting from other foods.

Scientists are creating genetically altered foods that contain nutrients known to help fight disease or malnourishment, to improve human health, mainly in underdeveloped countries. An example of this is Golden Rice, which has beta-carotene, the precursor for Vitamin A production in our bodies.

Biotechnology in agriculture has led to the engineering of plants that are resistant to pesticides. This allows farmers to selectively kill weeds without harming their crops. The technology was first introduced in genetically modified soybeans, making them resistant to the herbicide glyphosate. The herbicide can be applied in copious amounts to eliminate plants on a field other than the Roundup-Ready plants. Selective elimination of weeds saves farmers’ valuable time as compared to the traditional process of weeding.

Biotechnology is not just about developing genetically modified foods and crops it has some aesthetic applications as well. Scientists are using gene recognition and transfer techniques to improve the color, size, smell, and properties of flowers. The technology has been used to improve other ornamental plants such as shrubs and trees. Some of the methods applied are similar to those used on crops.

There is more to biotechnology than just fighting disease or improving food quality. There are aesthetic applications; an example of this is the use of gene identification and transfer techniques to improve the color, size, and other features of flowers. Also, biotech has been used to make improvements to other common ornamental plants, in particular, shrubs and trees. Some of these changes are similar to those made to plants, such as enhancing the cold resistance of a breed of the tropical plant so that it can be grown in gardens. 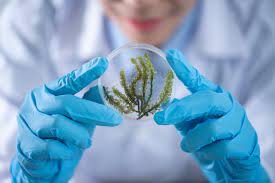 Biotechnology is safe, effective, and widely used by more than 18 million farmers around the world Biotechnology is a proven tool that has successfully improved crop productivity for growers, resulting in an abundant and affordable food supply. Different studies have shown the safety of technology to human beings, animals, and the environment.